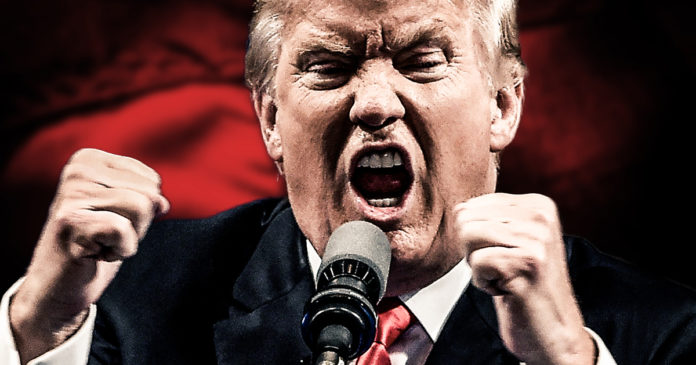 President Donald Trump has finally completed his turn against Fox News in response to an appearance by Fox News contributor and former DNC chair Donna Brazile.

During his “executive time” on Wednesday, Trump watched Fox News and caught an appearance by Brazile, who spoke to host Sandra Smith on America’s Newsroom. Trump then became enraged enough that he took to Twitter to whine about how Smith did her job, and went on to complain about other Fox News employees before calling on his supporters to ditch the network.

Just watched @FoxNews heavily promoting the Democrats through their DNC Communications Director, spewing out whatever she wanted with zero pushback by anchor, @SandraSmithFox. Terrible considering that Fox couldn’t even land a debate, the Dems give them NOTHING! @CNN & @MSNBC….

….are all in for the Open Border Socialists (or beyond). Fox hires “give Hillary the questions” @donnabrazile, Juan Williams and low ratings Shep Smith. HOPELESS & CLUELESS! They should go all the way LEFT and I will still find a way to Win – That’s what I do, Win. Too Bad!….

….I don’t want to Win for myself, I only want to Win for the people. The New @FoxNews is letting millions of GREAT people down! We have to start looking for a new News Outlet. Fox isn’t working for us anymore!

Trump clearly just admitted that Fox News has been working for his administration instead of working to find and report the truth even if it’s damaging to the president. And because the network is not completely in his pocket, Trump is abandoning it and telling his supporters to do the same in favor of a network that is even friendlier to his propaganda.

Just a few weeks ago, Trump lashed out at the network for reporting on their own poll that shows Trump losing to former Vice-President Joe Biden.

This latest meltdown could be a turning point in how Fox News reports on Trump heading into the 2020 Election. After all, one good turn deserves another, and the network is surely not going to appreciate Trump trying to shepherd viewers to a more extreme competitor. This might very well be the biggest mistake Trump has made as 2020 approaches because while we all know Trump turns on everyone eventually, Fox News may not have seen it coming so early.

The question is will the network fire back by turning against him, or will they double down on his propaganda and bow to his demands in order to please him? Because the latter is how dictatorships are created.