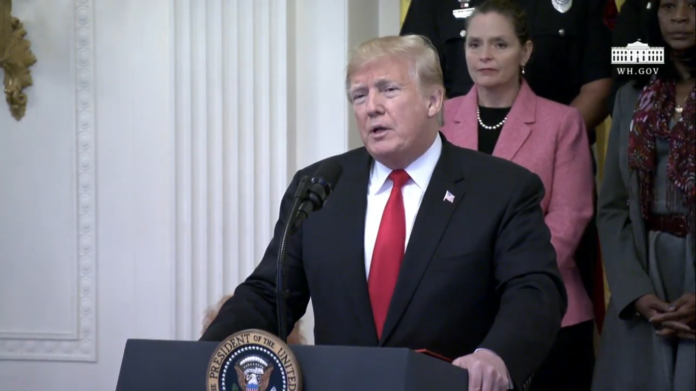 Hours after bombs were discovered in packages sent to several high-profile Democratic political figures — including former presidents Bill Clinton and Barack Obama — President Donald Trump spoke at the White House on the matter, assuring Americans that their safety is his “highest priority,” and adding that a major federal investigation is now underway to track down whoever sent the package bombs.

Trump also called the bomb threats “despicable acts” and urged Americans to “unify … to come together.”

As the president was speaking, yet another package, this one intended to reach Rep. Maxine Waters (D-CA) was also taken from a mail facility in Washington, D.C. by law enforcement authorities.

While Trump declared that he was “extremely angry” and upset by the bomb threats, he failed to mention that another package bomb was also sent to CNN’s national headquarters in New York City.

All of the recipients of these crude pipe bombs have been highly critical of Trump, who has been known to refer to his former Democratic rival, Hillary Clinton as “crooked Hillary.” On the 2016 campaign trail, Trump also said that Obama was “the founder of ISIS,” at a campaign rally, asserting that the terrorist group was honoring Obama for helping to create them.

“This nation is under attack.”

On social media, some who support Trump are now trying to claim that Democrats sent explosive devices to themselves in order to gain sympathy with just two weeks to go before the midterm election.

Despite his comments at the White House Wednesday afternoon, Trump is still planning to fly to Wisconsin later this evening for a political rally. Will he address the bomb threats, which are clearly acts of domestic terrorism? And will he dial back his harsh rhetoric in light of today’s developments? That remains to be seen.