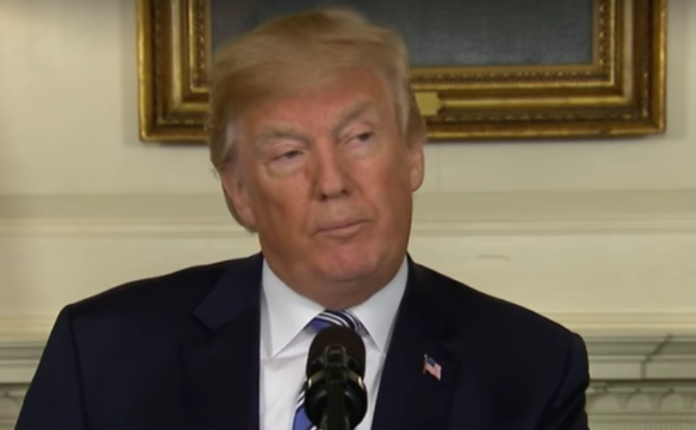 President Donald Trump took another step towards becoming a dictator on Friday by calling on Congress to grant him line-item veto powers that go completely against the Constitution.

On Friday morning, Trump threatened to veto the Omnibus spending bill passed by Republicans and Democrats because he didn’t get his way on funding for his border wall.

I am considering a VETO of the Omnibus Spending Bill based on the fact that the 800,000 plus DACA recipients have been totally abandoned by the Democrats (not even mentioned in Bill) and the BORDER WALL, which is desperately needed for our National Defense, is not fully funded.

Vetoing the bill would have led to a government shutdown on Saturday.

Later in the day, Trump apparently thought twice about vetoing the legislation and reluctantly decided to sign it instead, but not without holding a press conference to whine about it.

Before going on to claim that he was forced to sign the bill into law, Trump said:

Trump also blamed Democrats for the spending increases in the bill even though Republicans control the majority in both the House and the Senate.

And then Trump demanded Congress give him unconstitutional powers so he can veto the parts of bills he doesn’t like and sign the rest into law.

“To prevent the omnibus situation from ever happening again, I’m calling on Congress to give me a line-item veto for all government spending bills, and the Senate must end — they must end the filibuster rule and get down to work. We have to get a lot of great legislation approved, and without the filibuster rule, it’ll happen just like magic.”

As a matter of National Security I’ve signed the Omnibus Spending Bill. I say to Congress: I will NEVER sign another bill like this again. To prevent this omnibus situation from ever happening again, I’m calling on Congress to give me a line-item veto for all govt spending bills! https://t.co/kYwMk5AE5k

Ending the filibuster would be a strategic blunder for Republicans since Democrats are poised to take back the Senate and the House in November, thus stripping the GOP of any minority power they could use in 2019.

But Trump’s line-item veto demand has one big problem. The Supreme Court has already ruled it unconstitutional.

The Line Item Veto Act of 1996 was passed so that former President Bill Clinton could pick and choose what spending items to veto and sign into law.

In a 6-3 decision in 1998, the high court ruled the Line-Item Veto Act violated the Presentment Clause by giving the executive branch the power to alter legislation duly passed by the legislative branch.

Trump could screw Democrats over by vetoing items they support while signing only what he likes into law. Thus, compromise and negotiations would be worthless in Congress and the minority party would be trampled.

Plus, Congress would be giving Trump the “power of the purse.”

The Constitution only gives the president the power to sign or veto bills in their entirety. What Trump is asking for is a power that is unconstitutional and would threaten the balance of power between the three branches of government. No president should have this power. Not Clinton when it was passed in 1996, and certainly not Trump in 2018.

Clearly, Trump has not read the Constitution, nor was he paying attention in the 1990s when this fight happened the first time.

Apparently, he was too busy fighting his own “personal Vietnam” by having risky unprotected sex with woman after woman to notice. That’s coming back to bite him in the ass now.

This is nothing more than a power grab by a wannabe dictator and Congress would be foolish to give him what he wants.