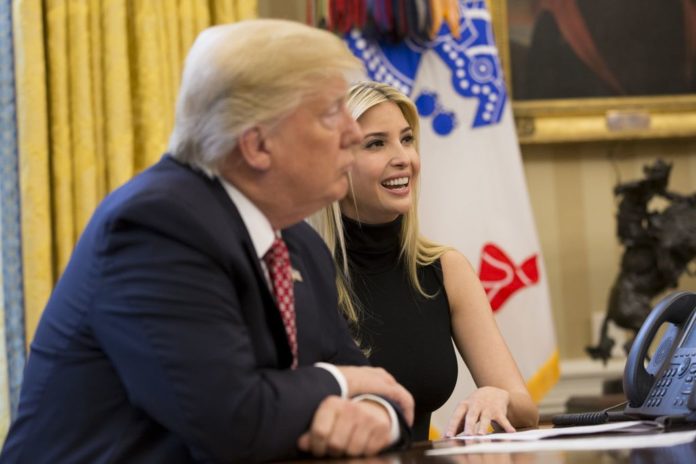 As President Donald Trump continues to dial up the rhetoric and threats in his growing trade war with China, imposing tariffs on aluminum and steel imports and promising another $100 billion in duties on other products, he made sure and exempted companies that manufacture clothing.

The president’s daughter, who also serves as a senior White House adviser, just so happens to own such a clothing company. Does that sound like a coincidence?

A new report from ThinkProgress notes:

“A recent report by the Huffington Post found that the president’s daughter and closest adviser rakes in a total of $1.5 million a year from the Trump Organization while still working at the White House.”

That’s one hell of a profitable double standard.

This isn’t the first time Ivanka Trump has used her role as a top adviser to shield herself and her company from scrutiny. Last summer, three Chinese activists were arrested when they tried to expose labor conditions at a factory making clothes for the First Daughter’s apparel line. According to those activists:

“Employees were forced to work 12-hour days, at least six days a week, at a monthly salary of about 2,500 yuan, or $365. The workers had been given no safety training, even though many came into contact with dangerous hot oils and glues regularly.”

When the press began asking questions about conditions at the Chinese factory in question, Ivanka’s attorney, Jamie Gorelick, commented that Ivanka had:

“Been advised that she cannot ask the government to act in an issue involving the brand in any way, constraining her ability to intervene personally.”

No need to comment or even care as long as you’re making a profit, is there, Ivanka?

So while a trade war may indeed be brewing, Ivanka Trump isn’t the least bit worried. She’ll continue to feather her nest while exploiting Chinese workers and making sure daddy protects her business interests no matter what.

Donald Trump loves to talk about how he’s going to “drain the swamp.” Meanwhile, he and his family enrich themselves at the expense of the American people and exploited workers overseas.