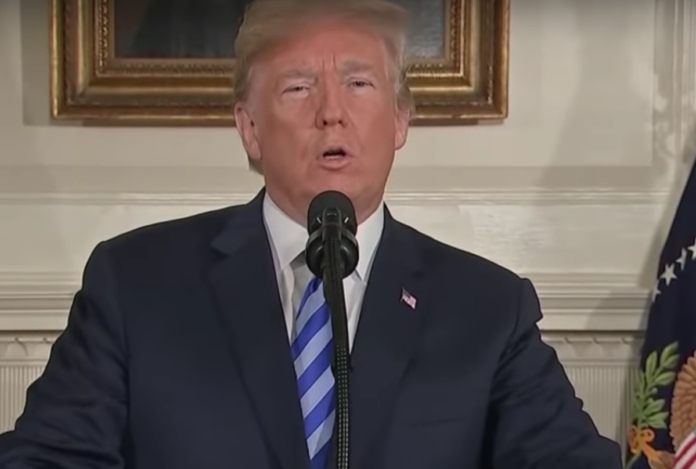 President Donald Trump has manufactured another world crisis as he officially announced on Tuesday that he will withdraw the United States from the Iran nuclear deal, a decision that will have dire consequences.

“I am announcing today that the United States will withdraw from the Iran nuclear deal,” Trump said from the White House Diplomatic Room. “It is clear to me that we cannot prevent an Iranian nuclear bomb under the decaying and rotten structure of the current agreement. The Iran deal is defective at its core.”

It is ironic that Trump chose to kill a successful example of diplomacy from the Diplomatic Room, especially since withdrawing from the deal could lead to war with Iran, and even nuclear war should Iran resume their nuclear program and develop a nuclear weapon.

In 2015, the United States reached the landmark diplomatic deal with Iran that has significantly reduced their nuclear program in exchange for the lifting of devastating economic sanctions.

The deal is considered one of former President Obama’s finest foreign policy victories.

So, of course, Trump hates the deal and has been itching to withdraw from it.

He wants a deal that includes Iran’s ballistic missile program and addresses Iran’s military actions in other areas of the Middle East.

But Trump is unlikely to get any such deal.

Not only do our European allies still support it, Iran will probably simply kick inspectors out of the country and restart their nuclear program. Plus, they will have no real reason to trust the United States to honor any deal in the future, especially one offered by Trump, who is notorious for breaking deals since taking office, including the Paris climate agreement and various trade deals that could end up including NAFTA if he gets his way.

In response to Trump’s decision, Iranian President Hassan Rouhani slammed America for not honoring its commitments.

“We can clearly see which country is not respecting the international commitments,” he said.

It was only last month that French President Emmanuel Macron defended the deal in a speech to Congress.

“Iran shall never possess any nuclear weapons – not now, not in five years, not in ten years, never,” he said. “But this policy should never lead us to war in the Middle East. We must ensure stability and respect the sovereignty of nations, including that one of Iran. We signed it at the initiative of the United States. We should not abandon it without having something more substantial instead. That’s my position.”

France, the United Kingdom, and Germany have already denounced the U.S. withdrawal and remain committed to the deal even as Trump announced that he will reinstate sanctions.

“Our governments remain committed to ensuring the agreement is upheld, and will work with all the remaining parties to the deal to ensure this remains the case including through ensuring the continuing economic benefits to the Iranian people that are linked to the agreement,” the statement said.

While Trump has been hell-bent on breaking the deal, Iran has faithfully held up their end of the bargain, which is why Trump had been forced to re-certify the deal every time thus far.

Former Secretary of State Rex Tillerson repeatedly urged Trump to keep the deal intact, and former National Security Adviser H.R. McMaster confirmed that Iran is in compliance. Both have since been fired and replaced with hawks who would prefer war with Iran over diplomacy.

Trump has withdrawn America from the deal without cause, which gives Iran every right to resume their nuclear program, and they may become a nuclear power sooner than Macron predicted because of it. Upon not getting the deal he wants, Trump could very well march our country into yet another war. But make no mistake, this would be a war of Trump’s own making. We should build upon the current deal instead of starting over from scratch.

The nuclear deal did what it was designed to do. Iran stopped pursuing a nuclear bomb and allowed inspectors into the country to verify it. For three years now, Iran has remained compliant, and the threat of a nuclear Iran has been mitigated.

But that will all change because Trump killed the deal, and our troops and reputation around the globe will pay the price for it.