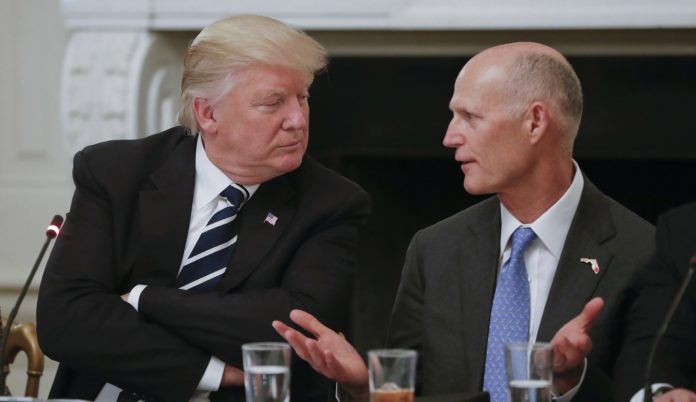 The Florida Senate race between incumbent Bill Nelson (D) and Rick Scott (R) is headed for  a statewide recount, with Scott leading by just 17,000 votes out of more than 8.1 million ballots cast in Tuesday’s election.

For his part, Scott filed suit Thursday against the election boards in Broward and Palm Beach counties, accusing “unethical liberals” of trying to steal the election. However, Scott provided no proof of his allegations.

And now President Donald Trump has joined the fray, alleging that “election fraud” took place in Florida and is preventing Scott from being named the winner:

Law Enforcement is looking into another big corruption scandal having to do with Election Fraud in #Broward and Palm Beach. Florida voted for Rick Scott!

Much like Scott, Trump also failed to provide any factual corroboration for his specious claim of fraud, choosing to toss around a serious charge without a shred of evidence.

Both Scott and Trump should welcome a recount if they’re convinced the GOP victory is assured. If indeed “Florida voted for Rick Scott!” then a full recount of the ballots (which is mandated by state law) would serve to bolster Scott’s legitimacy as the next senator from the Sunshine State.

How can you possibly know how Florida voted before all the votes have been counted? This might come as a huge shock to you, but “truth” is not up to you to decide.

GOP Playbook for elections:
1. Suppress the vote of blacks and Latinos.
2. Only count the votes of supporters (aka white people)
3. Scream “Voter fraud” if you start losing a close election.
4. Repeat.

First, law enforcement is looking into you and your brood. Second, One reason for hope for Nelson is that a traditionally Democratic area, Broward County, has so far reported fewer votes for the Senate race compared with the gubernatorial race,

How do you know Florida voted for Scott if all the votes haven’t been counted? If afterwards, it tips in Scott’s favor, we move on! But how about you have a hot cup of shut the fuck up until then, huh?

Yes, since the 2000 election it has been illegal to accurately count the votes in Florida, or at least the Republicans believe this to be the case. Whatever you do in Florida, don’t count all the votes! And here’s Donald with the latest fake news story of election fraud.

What Trump neglected to mention is that in the 2016 election he supposedly “won,” all the ballots were counted and he lost by nearly 3 million votes. Sounds like the very definition “election fraud,” doesn’t it?