The United States Blues
Home Activism Trump Expects Huge Crowds During His Visit To California But They May... 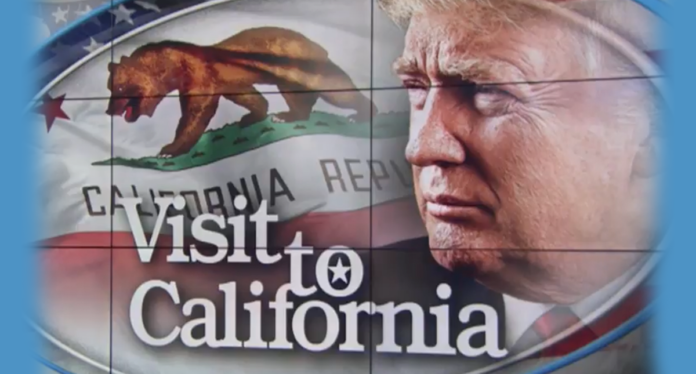 Trump is headed to Southern California on Tuesday and Wednesday. He has yet to set foot in the state since taking the White House. Probably because California is the “epicenter of resistance” to his regressive environmental regulations, his proposed border wall, marijuana legislation, and his ICE raids on immigrants.

Trump lost to Hillary Clinton by 4 million votes in the state, which is home to one in eight Americans and is the world’s sixth-largest economy all by itself. Trump has taken longer to visit the state than any other sitting president since Franklin D. Roosevelt, and the reason is apparent: He’s detested by most of the population.

It’s like going into enemy territory, in a state where whites have been outnumbered by Hispanics, blacks and Asians combined since 1998. How very scary for any racist, and especially one who campaigned on deporting and denigrating minorities, especially Hispanics. Now the DOJ under Trump’s leadership is suing the state for blocking ICE raids and designating Sanctuary Cities.

“You’ve never had a state as large and as economically and politically important to the nation and the world standing in outright opposition to a sitting president on a number of policies, including immigration,” said Louis DeSipio, a professor of political science at UC Irvine.

It looks like Trump can’t stay away from California any longer. Why? He is going to look at prototypes for his protested border wall on the neighboring border with Mexico in San Diego. He will tour “eight different 30-foot chunks of wall” in an industrial zone, at the base of the Otay Mountains, according to USA Today. The prototypes are visible in a neighborhood in Tijuana, where protesters and curious onlookers are expected to gather on the other side of the border.

The Star noted that Trump told Alabama rallygoers last year he would make a sort of “Miss Universe-style pageant” out of the prototype selection:

“I’m going to go out and look at them personally and pick the right one,” said Trump.

The other reason Trump is headed to California. Can you guess? If you immediately guessed, “A Beverly Hills fundraiser,” then you are correct. The Republican fundraiser will take place in Los Angeles’ Westside, and tickets will sell for $35,000 – $250,000 dollars according to a report from CBS Los Angeles. (See the video below)

Because of the violent protests that surrounded many of Trump’s rallies in the area, San Diego Police have maintained a near-constant presence at the prototype site.  To date, there have been no protests near the area but that is about to change. Although they may not measure up to the scale of the Women’s March, there are protests organizing in the Beverly Hills area, Los Angeles, and San Diego, and on the other side of the border in Mexico.

“We are planning a massive protest to drive him out of Los Angeles. We call on ALL organizations who stand against fascism, imperialism, capitalism, racism and all forms of hatred to join this action!”

Next week Trump will be making his first visit to California. Protests are being planned for San Diego and Beverly Hills. Take to the streets. pic.twitter.com/i3osI5mSDc

Related: Billboard Calling For Trump’s Impeachment Goes Up Near Mar-A-Lago

A political group, Union del Barrio is planning protest rallies in both locations that Trump will visit, and may have a thousand people or more attending.

“He cannot step foot in this state and not expect an organized response to denounce him,” Ron Gochez said. “We have dignity and we can only demonstrate that through denouncing Trump and fighting for freedom from fear. We are not just going to stand with our arms crossed while they deport us or attack Muslims or women’s rights.”

Another protest march will take place on Tuesday morning by the “Deport Trump Brigade,” a half mile away from the pro-wall rally, in a designated free speech area where weapons are prohibited. Even boards used for signs and banners are restricted as possible weapons.

“The main message is to get it through Trump’s head that he’s not welcome in San Diego or California, period,” said Jenerai Del Castillo, one of the event organizers.

Trump does have his supporters in California who are also planning to come out to support Trump near the prototypes, including organizations against illegal immigration called We the People Rising, and San Diegans for Secure Borders. These groups are expected to be heavily outnumbered by the anti-Trump crowd.

Who's coming to the Patriot Rally of the Year Tuesday?!

Posted by San Diegans for Secure Borders on Saturday, March 10, 2018

Los Angeles Deputy Police Chief Horace Frank says, “We are prepared for anything,” but USA Today reports that law enforcement agencies “haven’t been formally notified of the president’s visit yet or received any requests to secure the area across the border from the prototypes.” Mexican officials are monitoring the situation.

Some interesting side-notes: California was home to Richard Nixon and Ronald Reagan. There have been many comparisons between Trump and Nixon, and fewer between he and Reagan, though he would definitely prefer the latter more flattering illusion right about now.