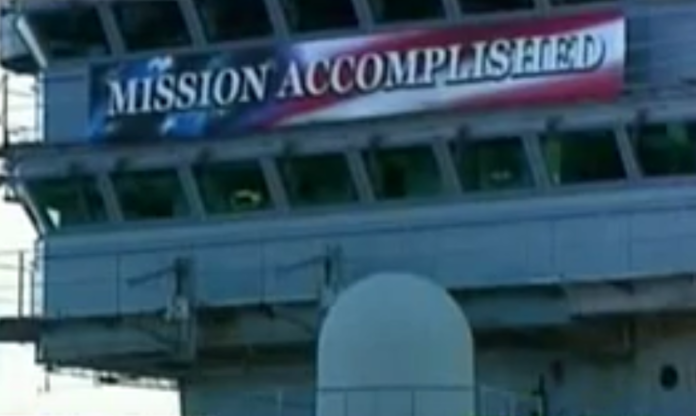 President Donald Trump did not give a speech or hang a giant banner on an aircraft carrier like former President George W. Bush did in 2003, but he might as well have when he declared “Mission Accomplished” on Twitter following his missile strike against Syria.

On Friday night, Trump announced that the United States, along with France and the United Kingdom, launched joint missile strikes against Syria in response to the alleged chemical attack carried out by Syrian President Bashar al-Assad earlier this month.

Earlier this week, Russia warned the United States not to take military action against Syria, a nation that is still in a state of civil war, a conflict that also involves several countries, including Israel, China, Russia, Iran, and Turkey.

However, after listening to advice from Fox & Friends to bomb Syria as a distraction from his scandals, Trump ordered military action anyway, striking several targets believed to be associated with Assad’s chemical weapons program.

By bombing Syria, America is now seemingly at war. Assad is still in power and it is unknown how nations such as Russia, Iran, and China will react.

A perfectly executed strike last night. Thank you to France and the United Kingdom for their wisdom and the power of their fine Military. Could not have had a better result. Mission Accomplished!

So proud of our great Military which will soon be, after the spending of billions of fully approved dollars, the finest that our Country has ever had. There won’t be anything, or anyone, even close!

If that sounds familiar, it should.

But as we all know, the War in Iraq would drag on for another eight years until 2011. And even now, the United States still has forces in Iraq.

In the years since “Mission Accomplished,” some 149,053 civilians have been killed, compared to about 7,412 prior to the speech, according to the website Iraq Body Count. Since the speech, 4,637 military members in the Iraq War coalition led by the U.S. have lost their lives, versus 172 prior, according to the Iraq Coalition Casualty Count. As of September 2014, total U.S. expenditures on the war in Iraq totaled $815.8 billion, about 93 percent of which was spent after 2003. That cost is more than 16 times the Bush administration’s original projection.

The Syrian conflict may be even more complicated than the Iraq war, especially since Russian troops are on the ground there and so many other nations are involved. Trump may have just dragged America into a war that could have far deadlier and more destructive consequences, and that’s on top of a potential war with Iran and North Korea and the wars we are still fighting in Afghanistan, Yemen, Iraq, and Libya.

As the Treasury runs dry here at home because of recent tax giveaways to the wealthy, we are spending trillions of dollars on war and could end up spending even more because of Trump’s actions.

Our role in the Syrian conflict could last for many years and turn into a world war despite Trump’s declaration of “Mission Accomplished.” This is one repetition of history that America did not need.