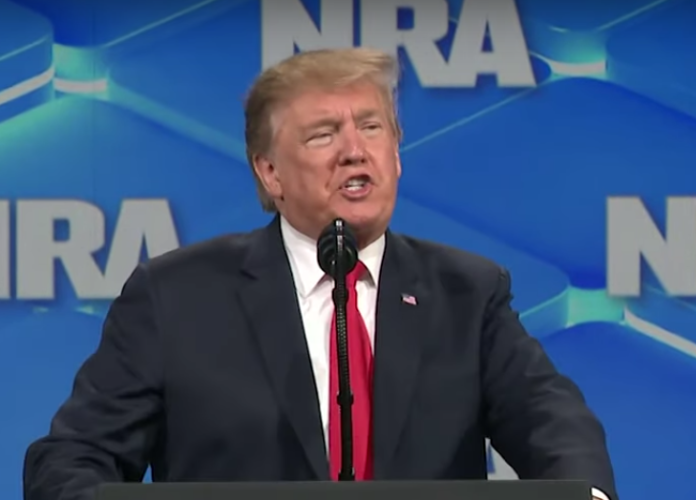 President Donald Trump is coming to the aid of the National Rifle Association (NRA) by using the same strategy he used to attack the Russia investigation against the New York state investigation into the gun lobbyist- declare it “illegal.”

The state of New York has opened an investigation into the NRA to look into allegations that executives at the supposedly non-profit organization filled their own pockets after the gun safety group Everytown for Gun Safety filed a complaint with the IRS.

New York Attorney General Letitia James has ordered the NRA to preserve all financial documents as the organization continues to deal with internal power struggles, financial collapse and a federal investigation connected to campaign finance crimes and being infiltrated by Russians.

And despite pleas from NRA members that the organization distance itself from Trump, Trump defended it on Monday morning by once again attacking a legitimate investigation.

The NRA is under siege by Cuomo and the New York State A.G., who are illegally using the State’s legal apparatus to take down and destroy this very important organization, & others. It must get its act together quickly, stop the internal fighting, & get back to GREATNESS – FAST!

Trump then suggested the NRA extract itself from New York and set up shop elsewhere, accusing the state of being “oppressive.”

….People are fleeing New York State because of high taxes and yes, even oppression of sorts. They didn’t even put up a fight against SALT – could have won. So much litigation. The NRA should leave and fight from the outside of this very difficult to deal with (unfair) State!

If New Yorkers needed a new reason to hate Trump, he gave it to them with these tweets.

But again, the New York investigation against the NRA is legitimate, as CNN reported:

The investigation comes after a dispute between the group’s president, Oliver North, and chief executive officer, Wayne LaPierre, in which North accused LaPierre of financial misconduct, according to the Wall Street Journal.

In a letter to the NRA board Thursday, LaPierre claimed North was pressuring him to resign and attempting to extort him, the Journal reported Friday.

North sent the board his own letter, telling them he was forming a crisis committee to look into the NRA’s finances, the newspaper noted.

He had previously accused LaPierre of charging over $200,000 in wardrobe purchases to a NRA vendor, according to the Journal.

North also raised other allegations to the board, including excessive travel expenses charged to a vendor and sexual harassment accusations against a senior NRA official, the Journal reported, citing people familiar with the matter.

So, even North had concerns about the organization’s finances and he publicly aired that concern. If his suspicions are accurate, that would mean the NRA would lose its non-profit status and lose further credibility among membership, who would likely stop donating money.

New York state has already pressured banking and insurance institutions into distancing themselves from the NRA, which has resulted in financial woes. But the organization only has itself to blame for being more concerned about selling guns than about kids dying at school because of mass shootings. Rather than support tighter and more responsible gun laws, the group has only pushed a “guns everywhere” response while only offering “thoughts and prayers” to the victims and their families.

This organization used to care about gun safety and responsibility. But it has become nothing more than a merchant of death operation with blood on its hands profiting off the killing of kids. And now Trump is defending that operation by trying to undermine the rule of law again.