The United States Blues
Home National News Trump defender Kayleigh McEnany gets taken to the woodshed for parroting his... 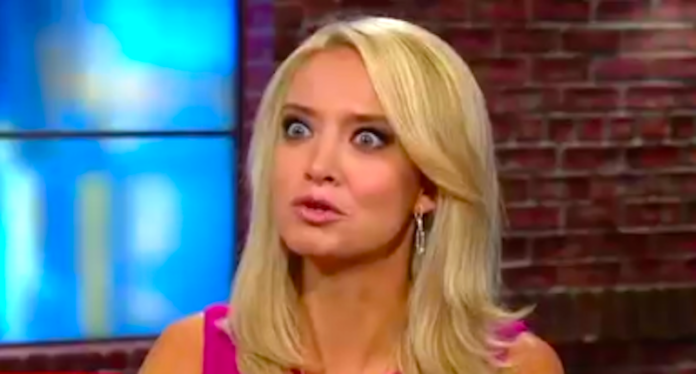 Kayleigh McEnany, who serves as an official spokesperson for President Donald Trump’s 2020 campaign, got a lesson in civics and civility when she began repeating the president’s racist rhetoric about four female members of Congress Wednesday evening on CNN.

During an appearance on “Cuomo Prime Time,” McEnany desperately tried to defend Trump’s call for “the squad” (who are all women of color) to leave the country if they disagree with the way things are in the United States:

“If you hate this country so much, by all means, exit.”

But McEnany only reiterated her disgusting talking point:

“By all means, leave it and allow an immigrant who’s dying to be here.”

Granholm then shut down the Trump campaign spokeswoman by letting her know in no uncertain terms that dissent is what makes America unique and special:

The president also reverted back to attacking Omar and her three colleagues at a rally in North Carolina Wednesday night, commenting:

This from a man who has repeatedly denigrated war heroes like John McCain and the families of those who served this country honorably such Khizr Khan, whose son died in 2004 while serving in Iraq. And yet Trump’s hatred for heroes is somehow seen as acceptable by his supporters and the Republican Party. How’s that for perverting what it means to be an American?

Those who criticize Donald Trump or his policies don’t hate this country. They hate what he’s trying to turn the country into.

“It is un-American to call out these women and say ‘send them back’… They are Americans!”
CNN Senior Political Commentator Jennifer Granholm clashes with National Press Secretary for the Trump Campaign Kayleigh McEnany over President Trump’s racist rhetoric. pic.twitter.com/JhN8imB4gf