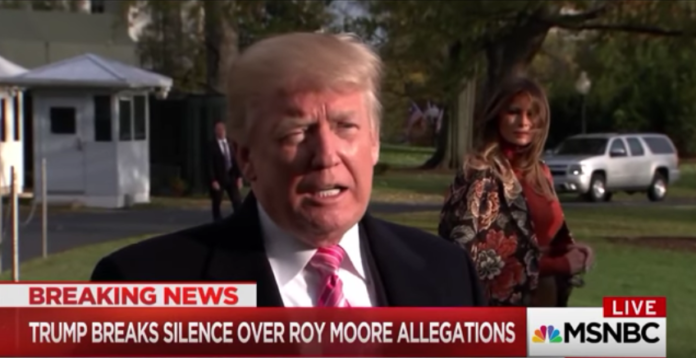 On his way out the door to travel to Mar-a-Lago for Thanksgiving, Donald Trump defended Roy Moore the same way he defended Vladimir Putin.

The Alabama GOP Senate candidate was hit with allegations of sexual assault from multiple women over the last couple weeks. Most of Moore’s victims were only teenagers at the time. One was just 14-years-old.

Many Republicans, including high-ranking Republicans in Congress, have called on Moore to step aside.

Trump has refused to comment on Moore ever since he returned from Asia. But he finally spoke out on Tuesday, and it was despicable.

He stopped short of a full-throated endorsement of Moore and insulted the victims after a reporter asked if a child molester “is better than a Democrat.”

Denial, of course, does not mean he’s innocent. Also, this hypocrisy comes after Trump attacked Al Franken on Twitter. I’m pretty certain that even if Franken had totally denied the allegations that Trump would still have attacked him because Franken is a Democrat.

Trump then tried to have it both ways by saying that “women are special” and that he’s glad all these allegations are coming out.

Except that he is clearly not willing to believe Moore’s accusers and called all of his own accusers liars during the 2016 campaign.

One bright spot in an otherwise dark and slimy moment was the way that Melania seemed disgusted by her husband’s remarks. She stared a hole into the back of her husband’s head for a few seconds before slowly walking out of view.

This marks an incredible new low for Trump and his administration. He would have been better off not saying anything at all. But it was clear that he would come out in support of Moore for a while now. For one, sexual predators support each other. And second, Kellyanne Conway basically said the same thing on Monday on Fox News when she urged voters to pick the pedophile over the Democrat for the sake of passing her boss’ tax plan.

It’s time for the Republican Party to grow some balls and start impeachment proceedings immediately. If they EVER want to be taken seriously as the “law and order” party, they should oust Trump and Moore. Because they can’t seriously agree with Trump that Moore’s opponent Doug Jones is “soft” on crime if they allow accused child molester Roy Moore to step one toe into the Senate.