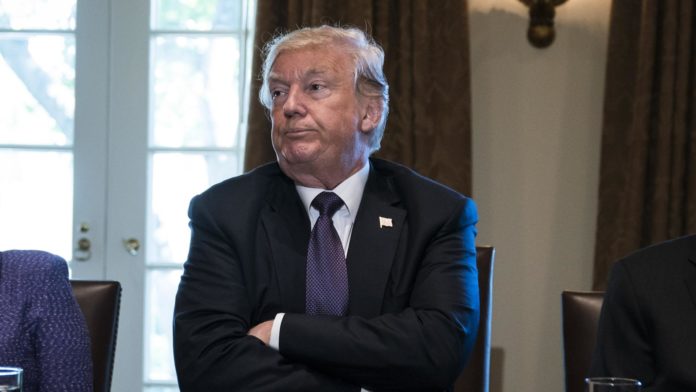 President Donald Trump demanded Democrats come back to Washington DC on Saturday morning despite the fact that Senate Republicans are the ones who adjourned for the weekend.

Trump’s government shutdown is now the longest and costliest in history as he continues to demand billions of dollars for his vanity wall on the southern border. And with no end in sight, Trump attacked Democrats on Twitter by demanding they return to Capitol Hill:

Democrats should come back to Washington and work to end the Shutdown, while at the same time ending the horrible humanitarian crisis at our Southern Border. I am in the White House waiting for you!

He then threw out a bunch of worthless statistics in an effort to demonize undocumented immigrants and defend his wall:

And also claimed Democrats could end the shutdown in “15 minutes.”

Democrats could solve the Shutdown in 15 minutes! Call your Dem Senator or Congresswoman/man. Tell them to get it done! Humanitarian Crisis.

First of all, House Democrats have already passed several bills that would reopen the government and end the shutdown. But Senate Majority Leader Mitch McConnell refuses to bring any of them up for a vote because Trump’s wall funding isn’t included, and because the bills would pass since several Republicans are willing to vote for them.

It should also be pointed out that Democrats can’t do anything without the Senate, which Republicans control. And it’s the Republicans who adjourned the Senate for the weekend, not Democrats. Yet, Trump isn’t attacking Republicans for leaving town.

Why would the Senate leave town this weekend before voting to reopen the government?! Countless federal workers aren’t being paid. People are worrying about how to pay bills. Congress could act now to fix it if Mitch McConnell would just take up a bill. Let’s stay here and do it!

Late Show host Stephen Colbert recently researched the statistics, and found that only 1 out of every 450 illegal immigrants apprehended at the border have a felony conviction.

Plus, illegal crossings are at historic lows.

And that’s not all, Trump also changed the amount of time he says it would take Democrats to end the shutdown.

During his meeting with Democratic leaders on Wednesday, Trump claimed they could end it in 45 minutes. He said the same thing during his Oval Office address on Tuesday night. But here he is saying that they could now end it in “15 minutes” as if changing the amount of time will make a difference.

The American people already blame him for the shutdown and Trump isn’t helping his case by lying and changing his story all the time.