The United States Blues
Home News Trump Demands Media Take Two Weeks Off From Covering Him As His... 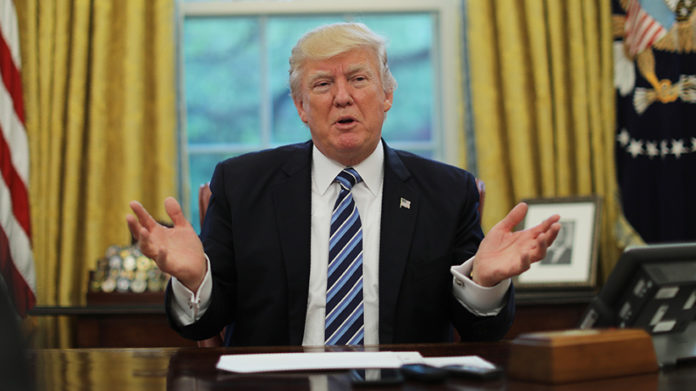 President Donald Trump is so desperate to keep the media from revealing his scandals and fact-checking his lies that he is resorting to demanding the press take two weeks off from covering him.

The press has not only repeatedly debunked his lies about the border and his wall in recent weeks, but have published bombshell revelations about his relationship with Russia and Vladimir Putin that would normally end any other presidency.

The Washington Post recently revealed that Trump has taken desperate measures to hide any records of his talks with Putin, even going so far as to take notes from his interpreter and has refused to tell his senior staffers what was said between them.

Furthermore, the New York Times reported that the FBI opened an investigation into Trump out of fear that he’s a Russian asset, which he did not directly refute during an interview on Fox News Saturday night.

Needless to say, all of the negative press has piled on Trump like an avalanche, which is why he’s desperate enough to demand the media take a two-week break from covering him:

The Fake News gets crazier and more dishonest every single day. Amazing to watch as certain people covering me, and the tremendous success of this administration, have truly gone MAD! Their Fake reporting creates anger and disunity. Take two weeks off and come back rested. Chill!

Of course, if the media did that, Trump could just continue lying to the American people without being fact-checked and would be able to keep the press from revealing any more bombshells that would damage his presidency.

This is your shutdown. You wanted everything to be about you, and you got what you wished for!

Republicans now have chosen to go down with you.

There are literally 800,000 people without a paycheck because of you, Russia continues to attack our infrastructure, and Millions of people can’t afford health insurance, and you tell them to Chill?

What success? You locked yourself in the White House crying about a wall.

You should take your own advice!

Instead of two weeks though it should be two years!https://t.co/eRNnyPVMSJ

You should do the same. Take off two years. Go to prison. Chill.

Stop using your position as President to attack the media. A free and independent press is essential to a healthy democracy.

BULLSHIT. Just as it did 45 years ago with Nixon, the Honest News Media will be instrumental in bringing you down and causing your resignation. I guarantee it… #Trump

As Trump’s government shutdown continues and hurts thousands of federal workers in the process, Trump telling the media to “chill” is particularly insulting. But if the media were to take two weeks off, he would be able to control the narrative through his propaganda with zero accountability. Trump knows he’s getting destroyed right now and he’s panicking, and as long as this country has a free press working around the clock, he will have a much harder time becoming the dictator he so desperately wants to be.