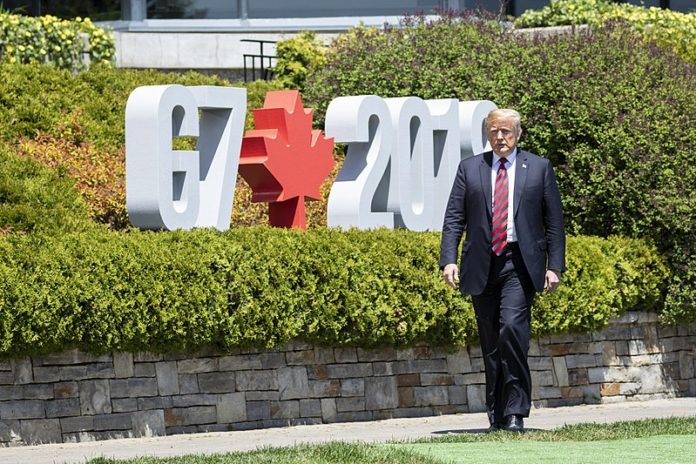 President Donald Trump is once again looking to profit off the presidency by demanding world leaders hold the G-7 conference at his struggling golf resort at Doral.

The annual summit took place in Canada last year and is taking place in France next month. But it is tentatively scheduled to be held in the United States in 2020.

Instead of hosting it at a neutral location in America that doesn’t enrich his own businesses, Trump is apparently demanding it be held at his National Doral Golf Club in Florida, according to Washington Post reporter David Fahrenthold.

This would be a serious conflict of interest that would be in violation of the Emoluments Clause. Holding the G-7 at one of his resorts would generate millions in profit for himself and his family. Trump is clearly looking to promote his golf course, which has been in steep decline, especially since he took office. Holding the G-7 there would generate attention and revenues.

And if that doesn’t look bad enough, he would be doing it during an election year.

Trump is already under fire for enriching himself with the office, but doing it months before the 2020 election would anger voters across the country, voters he can’t afford to lose considering most polls, including his own internal campaign polls, show him losing in every swing state.

Of course, the other G-7 leaders could just reject the location and hold the summit somewhere else. And if Trump pouts and refuses to show up they can just rename it the G-6 until he leaves office.

Trump is already profiting off the presidency by charging taxpayers millions of dollars so he can play golf at his various courses with Secret Service protection. Trump’s DC hotel is also host to foreign and domestic lobbyists and organizations that want to curry favor.

It would be outrageous for Trump to try turning the G-7 into a business venture, but that’s exactly what he apparently aims to do, embarrassing America in the process.