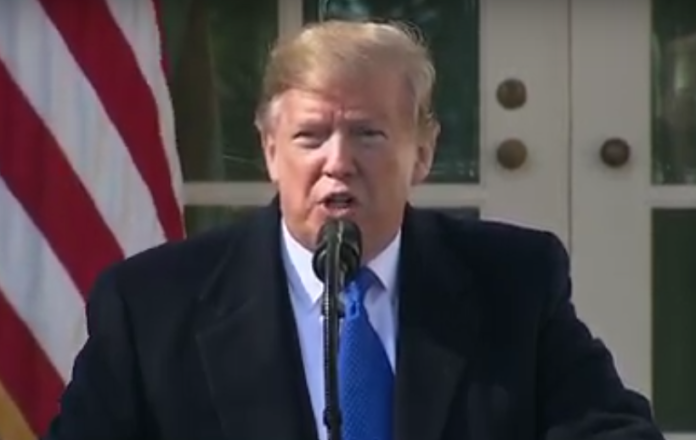 President Donald Trump declared a national emergency over illegal immigration on the southern border Friday morning on the basis of false claims he has repeatedly made, drawing a challenge from two reporters who came armed with statistics.

First, CNN’s Jim Acosta pointed out that illegal immigration is at a record low according to Homeland Security and that undocumented immigrants commit crime at a lower rate than American citizens. Acosta also noted that Trump outrageous claims of women being tied up with duct tape have also been contradicted by fact-checkers.

All of this is true.

As for illegal immigration, it reached a record low.

According to Politico, “to find a year with fewer border arrests, you have to go back all the way to 1971. Indeed, a September 2017 report by the Department of Homeland Security was able to boast — somewhat inconveniently as Trump sought to secure funding for a wall along the southern border — that ‘the southwest land border is more difficult to illegally cross today than ever before.'”

That’s from Trump’s own Homeland Security.

But Trump disputed the statistics while rudely talking over Acosta.

“You don’t really believe that stat, do you?” Trump asked when Acosta said that illegal immigrants have a low crime rate. Trump then called CNN “fake news” and accused Acosta of having a “political agenda” as he himself used so-called “Angel moms” as props to advance his own political agenda to build a wall that most Americans oppose and will be ineffective at stopping drugs and crime.

Trump also claimed that CNN should look at our prisons to know that immigrants commit more crimes. Well, they already did.

Advocates have slammed statistics released by the administration. “The vast majority of immigrants in federal prison are there for crimes that only immigrants can be charged with — illegal entry and illegal entry after removal,” Tom Jawetz, the vice president for immigration policy at the Center for American Progress, told The New York Times in 2017. “When you cook the books you shouldn’t pretend to be surprised by the results.”

Trump would go on rudely demand a second reporter “sit down” after being confronted yet again with statistics, this time from the DEA showing that most drugs come through ports of entry, which makes Trump’s wall absolutely useless.

Nowhere in the White House’s own National Drug Control report does it recommend a wall to stop drugs from entering the country.

Here’s the video of the press conference.