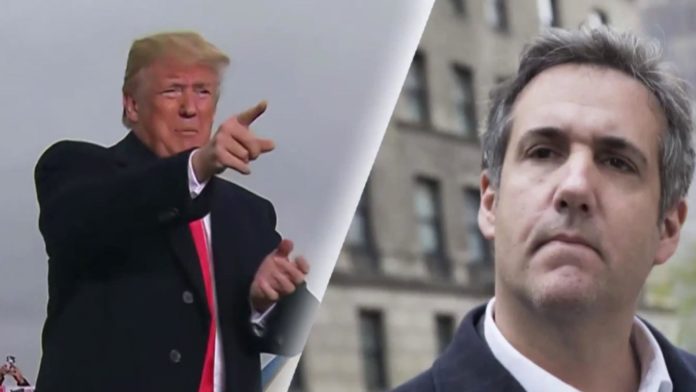 President Donald Trump is insisting that he committed no crimes all while blaming his former lawyer Michael Cohen for the campaign finance felonies related to the hush money paid to two women in 2016 to keep them quiet about extramarital affairs.

Cohen was sentenced to three years in prison on Wednesday for felony campaign finance violations during the 2016 Election. It was also revealed that the National Enquirer took a plea deal and admitted that the pay-offs were executed in an effort to help Trump’s campaign. And Cohen has implicated Trump for coordinating and directing the pay-offs. The only way Cohen would get a plea deal is if there were evidence to back up his witness testimony.

All of Trump’s desperate arguments to avoid legal liability have crumbled, especially since National Enquirer has flipped, but Trump once again argued on Thursday morning that even though he coordinated and directed the payments, Cohen is solely on the hook for the crimes.

I never directed Michael Cohen to break the law. He was a lawyer and he is supposed to know the law. It is called “advice of counsel,” and a lawyer has great liability if a mistake is made. That is why they get paid. Despite that many campaign finance lawyers have strongly……

….stated that I did nothing wrong with respect to campaign finance laws, if they even apply, because this was not campaign finance. Cohen was guilty on many charges unrelated to me, but he plead to two campaign charges which were not criminal and of which he probably was not…

….guilty even on a civil basis. Those charges were just agreed to by him in order to embarrass the president and get a much reduced prison sentence, which he did-including the fact that his family was temporarily let off the hook. As a lawyer, Michael has great liability to me!

It would appear that Trump did not write these tweets himself. But the argument is complete bullsh*t. He’s trying to use his former attorney as a shield as if only lawyers should go to prison for committing crimes their clients direct them to commit. That’s not how the law works, and legal experts responded by torching Trump’s rant.

I’m going to state the obvious—Trump didn’t write this, and he’s tweeting this quasi-legal argument instead of his usual “No Collusion!” screed because he knows he’s in real trouble. https://t.co/Tv8KhWk9UF

Everyone in that courtroom, including the judge, concluded that you directed Cohen to commit a crime.

You don’t appear to have a viable advice of counsel defense because you were not seeking legal advice from Cohen at the time, and the burden would be on you to prove that. https://t.co/Tv8KhWk9UF

When all else fails, blame the “lawyer.”

Sweet mystery of life—how does someone plead guilty to charges that are not criminal? https://t.co/2758SW4zqj

Reminder: 100 percent lied when he said in April he “did not know about the 130k payment to Stormy Daniels” — why should we believe him now? https://t.co/0ufRrbSlrz

I really do hope that Trump gets some “advice of counsel” soon. https://t.co/0ufRrbSlrz

And as Norm Eisen wrote for CNN:

The wide-ranging nature of the scheme implicates not only campaign finance statutes, but also criminal conspiracy liability, which happens whenever two or more people conspire to commit a crime or defraud the government and then act upon that conspiracy. In this case, Cohen even taped at least one discussion with the President — resulting in evidence demonstrating Trump’s knowing participation in the scheme.

While this argument does speak to the potential campaign finance charges because they require specific intent to violate the law, the elaborate machinations surrounding the payments and subsequent efforts to conceal them, including what’s described in Cohen’s taped conversation with Trump, imply that all involved likely knew they were doing something that the law forbade.

In short, Trump is just as liable for the campaign finance felonies as Cohen is. And Trump is only digging himself a deeper hole by spouting weak arguments. Those arguments have no support from any of the witnesses in this case, including Cohen and the National Enquirer, which is why Rep. Adam Schiff told CNN on Tuesday night that it’s now Trump’s word against everyone else. And that’s why Trump is totally screwed.