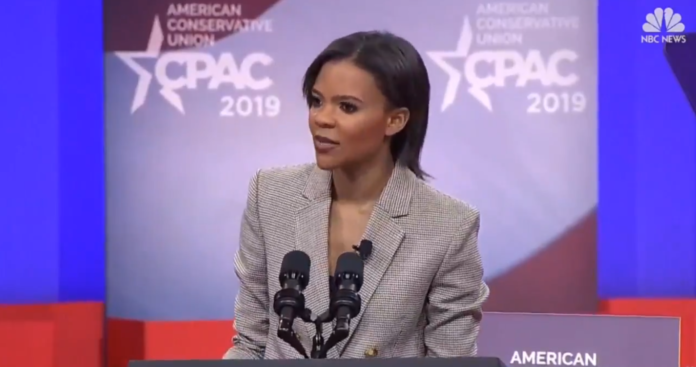 Candace Owens, the director of communications for the conservative advocacy group Turning Point USA, told attendees at CPAC Friday morning that she knows racism has been defeated in the United States because she’s not a slave.

Owens told the crowd that Democrats are oppressing the country by continuing to talk about racism:

“Stop selling us our own oppression. Stop telling us that we can’t because of racism, because of slavery. I’ve never been a slave in this country.” pic.twitter.com/bjsWBUVXPU

While she was at it, Owens also declared that right-wingers need to start “invading culture” with religious messages, comparing conservatives in the U.S. to artists in Renaissance Europe:

“It’s common sense to me that conservatives need to start invading culture, because we are the party that believes first and foremost in God. And in case you guys forgot, it was our belief in God and Judeo-Christian values that inspired culture in the first place. Florence [Italy] is arguably one of the most beautiful cities in the world. It’s dripping with some of the greatest masterpieces from the Renaissance. It was an explosion of art, of design, or aesthetic sensibility, and almost 100 percent inspired by God, Christianity, and the church.

“Conservatives, we are culture.”

Here’s the problem with both of Owens’ assertions: First of all, racism is alive and well in this country. If you doubt that, just look at the vile hatred and racism that spews from Donald Trump’s Twitter feed on a daily basis and remember that started his political career calling Mexicans rapists and drug deals. And then there’s his put-down of “shithole” countries in Africa.

As for conservatives and Renaissance, Ms. Owens clearly wasn’t present the day the Renaissance era was discussed in her high school history class. The reason artists of the period made paintings and other objects that dealt with religion is because the Catholic Church commissioned and paid them to do so.

Though it seems self-evident, we still need to repeat it as many times as possible: Right-wingers don’t have a clue when it comes to what really ails this country, and apparently they never will.