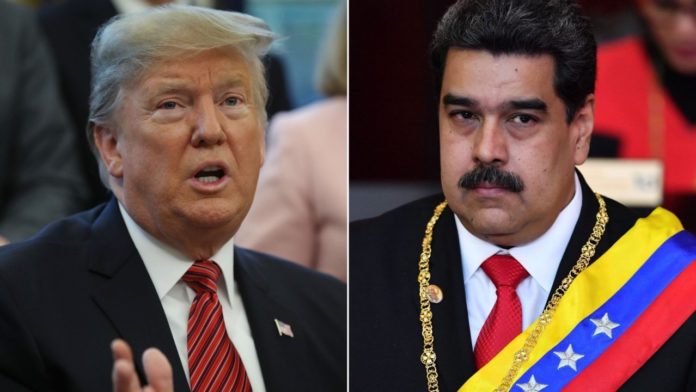 In an attempt to depose Venezuelan President Nicolás Maduro, President Donald Trump has told top national security officials that the United States should impose a naval blockade on the country, according to a report from Axios:

President Trump has suggested to national security officials that the U.S. should station Navy ships along the Venezuelan coastline to prevent goods from coming in and out of the country, according to 5 current and former officials who have either directly heard the president discuss the idea or have been briefed on Trump’s private comments.

Reportedly, Trump has been suggesting such a move for a year and a half, most recently just a few weeks ago, though the Pentagon is said to not take such an idea as a serious possibility because it would be “impractical,” might well be illegal, and would further stretch the U.S. Navy thin as it is already deployed to counter possible threats from China and Iran.

Current and former officials say Trump has been quite explicit with what he’d like to see done in regard to Venezuela:

“He literally just said we should get the ships out there and do a naval embargo,” said one source who’s heard the president’s comments. “Prevent anything going in.”

“I’m assuming he’s thinking of the Cuban missile crisis,” the source added. “But Cuba is an island and Venezuela is a massive coastline. And Cuba we knew what we were trying to prevent from getting in. But here what are we talking about? It would need massive, massive amounts of resources; probably more than the U.S. Navy can provide.”

Would Congress go along with such a move? It appears that Trump has at least one ally in the Senate, Lindsey Graham (R-SC), who had this to say about using the U.S. military to get rid of Maduro:

“I’ve been saying for months that when the Venezuelan military sees an American military presence gathering force, this thing ends pretty quickly.”

A member of Maduro’s cabinet — who is also allegedly a drug lord — has reached out to the White House via intermediaries, Axios notes:

Diosdado Cabello, an alleged drug lord with substantial power inside the Venezuelan political and military elite, has been communicating through emissaries with National Security Council official Mauricio Claver-Carone, these sources said. These sources did not know what messages, if any, Claver-Carone had sent back to Cabello through these intermediaries.

The State Department, however, is said to be extremely concerned about trusting or even talking to Cabello due to his alleged ties to the drug trade.

While a blockade seems highly unlikely at this point, it’s impossible to know what Trump might order in the future, especially if he thinks a show of force might bolster his already flagging poll numbers as he gears up for the 2020 election.