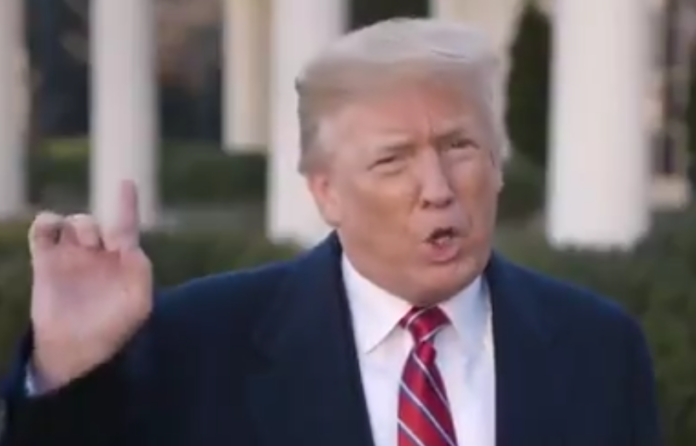 President Donald Trump used dead soldiers as props on Wednesday afternoon to excuse his snap decision to surrender in Syria after once again declaring victory over ISIS.

American forces have worked with our Kurdish allies in the region for years to push ISIS fighters back, driving them far beyond their original territory, but all of that is about to change because Trump has decided to pull our military out of Syria despite the fact that ISIS has not been defeated yet.

In a short Twitter post earlier in the day, Trump declared victory in Syria and announced a withdrawal, which many have criticized as being a surrender that will make Russia and Iran very happy.

The people of Syria are being forced to flee their homeland because of ISIS and Russian support for dictator Bashar al-Assad. The United States military withdrawing now puts liberated parts of the region at risk for re-occupation by ISIS, or to be pillaged by Russian and Syrian government troops.

Everyone from lawmakers on Capitol Hill like Senator Lindsey Graham (R-S.C.) to retired military leaders such as Lt. General Mark Hertling and national security experts have all criticized Trump’s decision and refute his claim that ISIS is defeated.

In a new effort to defend his decision, Trump sickeningly claimed that fallen soldiers support him after bragging about a so-called victory that doesn’t exist.

“And I’ll tell you, they’re up there looking down on us,” Trump said while pointing up to the sky. “And there is nobody happier or more proud of their families to put them in a position where they’ve done such good for so many people…We won. And that’s the way we want and that’s the way they want it.”

Again, American forces have not defeated ISIS. But pulling them out now gives ISIS a chance to regroup and retake territory, which would erase all the progress the United States military and our allies worked so hard to achieve.

Twitter users even pointed out that statements from Trump’s own officials contradict him.

Rex Tillerson hit the nail on the head: you are truly a moron!

This was your State Department YESTERDAY!👇

“We’ve made significant progress recently in the campaign, and – but the job is not yet done.”pic.twitter.com/DyuBwDTAin

This was your envoy for the Global Coalition to Defeat ISIS 8 days ago.👇

“Nobody is declaring a mission accomplished”

Our government is being run by an idiot!pic.twitter.com/xql8RoXyrv

These are 208 airstrikes this past week…

Weird why would we bomb an enemy in Syria that we “defeated”https://t.co/MQgq30HIEz

This is a Republican Congressman on the alleged defeat of ISIS…pic.twitter.com/xIz1DVVYkY

He wants to pull out of Syria and give the entire region over to Russia and IRAN… pic.twitter.com/PqZ9ACAfN5

If you consider ignoring 20,000 ISIS fighters in Syria and Iraq to be a “Historic Victory”, I’d hate to see what you would consider a loss.

They also thrashed him for daring to speak for fallen soldiers in support of himself.

Pretty horrendous of you to speak for the fallen American soldiers. Don’t politicize their sacrifice. America is cutting and running in Syria. They have NOT defeated ISIS. Its not to late though. Double your support for the SDF.

Speaking on behalf of fallen soldiers…you are a sick, disgusting person. Resign for the good of us all.

On the contrary, fallen soldiers would want the mission they died for to be completed. He never gets anything right 🤦🏻‍♀️

I can understand your decision to end what your party started, but DO NOT speak for fallen soldiers. For the respect to these fallen soldiers and their families, have prewritten and revised statements.

If anything, Trump has dishonored the fallen, who would want the mission they died for to be seen through to real victory and peace. Trump’s decision will only make things worse by allowing ISIS to regroup and give more influence to Russia and Iran, all while our allies are left to be slaughtered. This is a foreign policy travesty and one of the worst military blunders in our history. And it’s all on Trump and the Republicans who continue to allow him to remain in office.