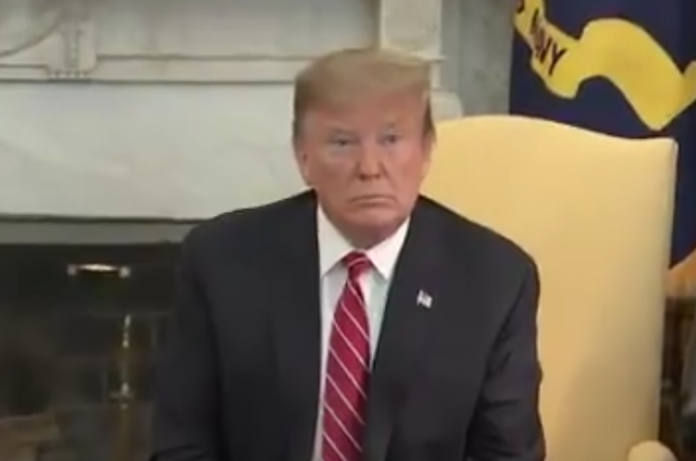 President Donald Trump took more shots at the late-Senator John McCain (R-Ariz.) on Tuesday during a press conference with Brazilian President Jair Bolsonaro, embarrassing himself and the nation in the process as the world watched.

Trump attacked McCain repeatedly over the weekend in a flurry of tweets, drawing a sharp rebuke from McCain’s daughter Meghan who slammed Trump on “The View” for “obsessing over great men you could never live up to.”

Despite the ridicule, Trump continued attacking McCain, who passed away after a battle with brain cancer last year, when a reporter asked him why he’s doing it.

“I’m very unhappy that he didn’t repeal and replace ObamaCare, as he campaigned on,” Trump said in the White House. “Our country would have saved a trillion dollars, and we would have had great health care. He told us hours before that he was going to repeal and replace and then, for some reason — I think I understand the reason — he ended up going thumbs up. I think that’s disgraceful. Plus there are other things. I was never a fan of John McCain and I never will be.”

NEW: “I was never a fan of John McCain, and I never will be,” Pres. Trump says in the Oval Office, calling the late senator’s health care vote “disgraceful.” https://t.co/wOFpFFu88A pic.twitter.com/CWXsYvop46

McCain cast his vote against Trump’s repeal and replace scheme back in the summer of 2017, almost two years ago, because it was a terrible bill that would have taken healthcare coverage away from 23 million Americans. Two years is a long time to hold a grudge just because the man decided not to take healthcare away from millions of Americans as he himself had just been diagnosed with brain cancer.

Trump should have declined to answer the question or he should have apologized for his unpresidential behavior. McCain is not here to defend himself, and continuing to spit on his grave is divisive and obscene, especially considering the fact that McCain is a war hero.

This was a moment to stop the attacks and not disgrace the country in front of a foreign leader. But, once again, Trump couldn’t stop himself from making our country an international laughingstock and staining the office he holds. That, more than anything Trump could say, is insulting to McCain and his legacy.