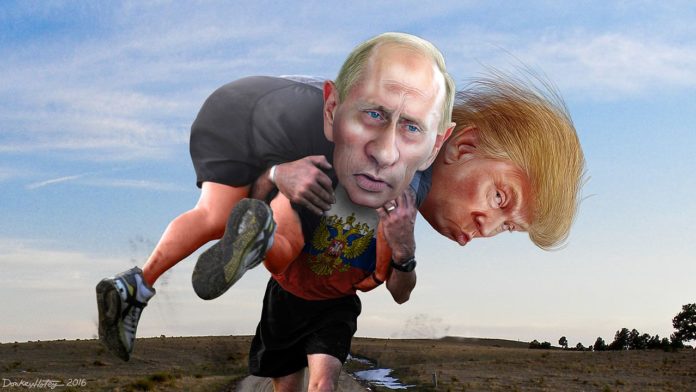 For months, Russian social media trolls have been trying to influence the 2018 midterm election with a new campaign called #WalkAway, claiming that Democrats are leaving their party to support President Donald Trump. On Saturday morning, Trump endorsed that propaganda campaign on Twitter.

Trump supporters are supposedly going to march in Washington DC later today under the #WalkAway banner, so he praised the “movement.”

CNN reports that the campaign is “presented as a grassroots effort by former Democrats,” but is actually the work of Russian bots.

“#WalkAway has also now been connected to Kremlin-linked Russian bots, and it is now the seventh most popular Russia-influenced hashtag,” CNN continued. “The purpose of this now-astroturf campaign is to manipulate public opinion by creating the illusion that this is a popular movement. In reality, #WalkAway has become pure propaganda, a psychological operation.”

Twitter users took Trump to the woodshed for once again spreading Russian propaganda.

You should just #Walkaway from the Oval Office.

Remember, the #WalkAway campaign is full of fakes! https://t.co/3NHFVgBfbQ

America needs to walk away from the wicked man posing as a president. One more week, impeachment is coming.

Every day I am embarrassed that America chose you to be our president. You are a disgrace to the office. We deserve better.

This is literally a Russian propaganda campaign!https://t.co/g5kxzv7oUq

You are the most incompetent President of all time. Once again carrying water for the Russians!https://t.co/586wY6kz6Z

The Russian bots were pushing this hashtag before you.

This is literally a Russian bot hashtag. You’re not even trying to hide that you’re a traitor.

Where are the pictures of the massive crowds? Or even the slightest bit of evidence WalkAway has done anything? They claim hundreds of thousands of people have left the Democratic party after a President who condones the KKK and AltRight came into office? That makes ZERO sense.

Walk away is a russian propaganda campaign.

I can’t believe you’re retweeting this.

Yeah, because what we need on this Saturday morning after a maniac tried to assassinate two former presidents and kill many more people is for the CURRENT president to act like an angry, divisive, hostility-spewing tone-deaf sociopath…Trump

#WalkAway has been connected to Kremlin-linked Russian bots, and it is now the seventh most popular Russia-influenced hashtag. Trump is spreading Russian propaganda and amplifying the Russian bots on @Twitter . @FBI @TwitterSafety @NSAGov

The bottom line is that Democrats are poised to retake the House on November 6th, and have a shot at taking control of the Senate, too. That’s why Republicans are desperate to stop the blue wave from happening and are so willing to push the #WalkAway propaganda. They figure Russia helped them in 2016, so they have no problem with Russia helping them again if it means remaining in power.