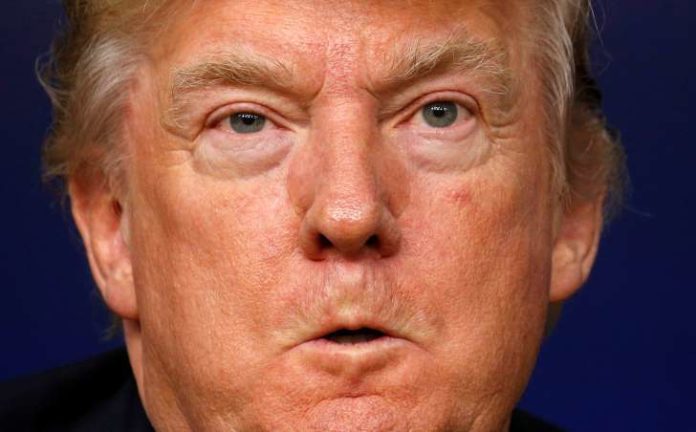 President Donald Trump lashed out at the media late Wednesday night for allegedly leaking “off the record” remarks he made to a group of news anchors prior to delivering his Oval Office address on Tuesday evening.

Trump spoke to CNN’s Chris Cuomo and Fox News’ Brett Baier among other news anchors prior to his speech in a meeting that he claimed to be “off the record,” but his remarks were leaked and they paint a picture of a pathetic individual who is desperate to try anything to get money for his wall.

According to the Washington Examiner, Trump expressed doubt that his speech would change public opinion about the wall and the government shutdown and admitted his visit to the border on Thursday will be nothing more than a photo-op stunt”

“It’s not going to change a damn thing, but I’m still doing it,” Trump said Tuesday, according to the New York Times.

Trump also reportedly told the network personalities that his trip to Texas on Thursday was a mere photo opportunity, but that White House communication aides Bill Shine, Sarah Sanders, and Kellyanne Conway thought it would be “worth it” as negotiations with congressional Democrats stall over funding for a physical barrier along the U.S.-Mexico border.

Well, Trump found out his remarks were made public, and so he spent Wednesday night throwing a tantrum aimed at the press:

The Mainstream Media has NEVER been more dishonest than it is now. NBC and MSNBC are going Crazy. They report stories, purposely, the exact opposite of the facts. They are truly the Opposition Party working with the Dems. May even be worse than Fake News CNN, if that is possible!

Gave an OFF THE RECORD luncheon, somewhat of a White House tradition or custom, to network anchors yesterday – and they quickly leaked the contents of the meeting. Who would believe how bad it has gotten with the mainstream media, which has gone totally bonkers!

Except that it appears Trump’s own staffers leaked his “off the record” remarks with other members of the press, who were not bound by Trump’s request. New York Times reporter Peter Baker and Breakfast Media White House correspondent Andrew Feinberg debunked Trump’s accusation:

We broke no off-the-record agreement — we were not invited to this lunch and therefore were under no obligations. We simply reported out what was said the same way we would have if he had met with, say, senators. Did the same with Obama. https://t.co/Iyrgm66JB8

Sir, your own staff leaked it to the same reporters they usually leak things to. Having not attended the luncheon, they weren’t subject to any OTR agreement.

Now, if Cuomo or Baier or any of the other anchors in the room had leaked Trump’s remarks he would have a case. But his own staffers leaking to reporters who were not in the room is something totally different. “Off the record” does not magically mean the entire media has to stay silent, only the members of the media in the room when Trump said it. And even then, saying “off the record” is not a binding agreement.

Trump’s outburst comes just hours after he threw a temper tantrum in the White House and stormed out of a meeting with Democratic leaders because he still isn’t getting his way on the wall he has been demanding for months and shut the government down over nearly three weeks ago.