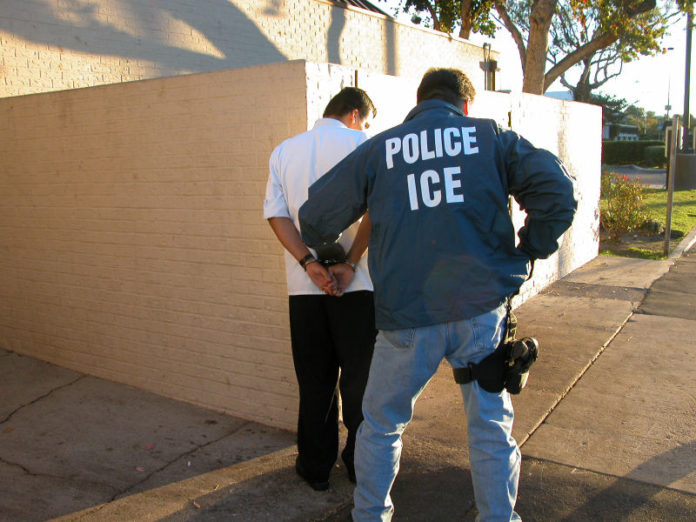 President Donald Trump smeared Democrats on Monday morning by accusing them of wanting his administration to release “criminal aliens” instead of detaining them in ICE detention centers after border security talks in Congress stalled over the weekend.

The crime rate among undocumented immigrants is incredibly low, much lower than natural born American citizens, but Trump’s anti-immigration goon squads have been terrorizing the interior of the nation since he took office by dragging suspected immigrants from their homes and communities to deport them even if they have never committed a crime, much less a serious one.

For instance, ICE officials deported an Army veteran to Mexico in 2018 despite his service in Afghanistan. And there are too many similar stories like this to recount here.

Clearly, ICE is not focusing on real criminals, which is why Democrats are trying to refocus the law enforcement agency by capping the number of beds at ICE facilities used for detaining people ICE arrests here in the United States.

And that became a sticking point in border security negotiations as Republicans refused to cap the number even though Democrats offered funding for a barrier on the southern border in exchange.

But Trump thinks Democrats want criminals released and he made the accusation on Twitter.

The Democrats do not want us to detain, or send back, criminal aliens! This is a brand new demand. Crazy!

But that’s far from the truth.

Democrats proposed lowering the cap on detention beds to 35,520 from the current 40,520 in return for giving Republicans some of the money they want for physical barriers, the source familiar with negotiations said.

But Democrats would create a limit within that cap of 16,500 beds at detention facilities for undocumented immigrants apprehended in the interior of the country. The remainder would be at border detention centers.

By having the interior cap, ICE agents would be forced to focus on arresting and deporting serious criminals, not law-abiding immigrants, a House Democratic aide said on Sunday.

“Claims that this proposal would allow violent criminals to be released are false,” the Democratic aide said.

Indeed, ICE agents would have to ignore law-abiding immigrants instead of arresting them just for being undocumented, keeping much-needed detention space open for immigrants who commit actual crimes such as murder and rape. They would also have to focus more on the border itself, which one would assume Trump would support since he claims there’s a national emergency at the border.

Obviously, Trump does not care about making distinctions because he’s a racist who thinks all brown people are criminals who must be rounded up by any means necessary even if they have become pillars of their communities and have never broken the law.

And it looks like he is prepared to shut the government down again rather than limit the scope of ICE, an agency that has been out of control since Trump took office, acting more like his personal Gestapo than a law enforcement agency.