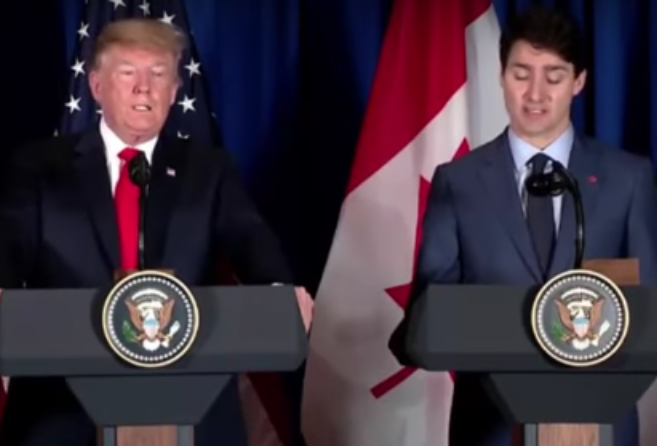 President Donald Trump continued claiming that Mexico is paying for the wall through the new NAFTA he signed in November, but fact-checkers have already repeatedly debunked him.

During his Oval Office address on Tuesday, Trump actually looked the American people in the eye and repeated the claim he had already been saying over and again on Twitter and at rallies.

“The wall will also be paid for indirectly by the great new trade deal we have made with Mexico,” he said.

Indeed, it was just one of many lies Trump told during his ten-minute address.

Trump then traveled to the southern border on Thursday to make the same claim.

On Friday morning, Trump made the claim again on Twitter.

I often said during rallies, with little variation, that “Mexico will pay for the Wall.” We have just signed a great new Trade Deal with Mexico. It is Billions of Dollars a year better than the very bad NAFTA deal which it replaces. The difference pays for Wall many times over!

The problem is that there’s no proof Mexico is even indirectly paying for the wall, nor has Trump and his cronies offered any.

What is clear is the new U.S.-Mexico-Canada Agreement Trump signed with other leaders on Nov. 30 contains no specific provision that requires Mexico to fund a wall. The deal requires congressional approval before it can take effect.

Former Mexican officials who negotiated the deal with the Trump administration have repeatedly said there is nothing in the deal to fund a border wall.

It turns out that U.S. companies may see increased profits and workers could see increased pay, but very little of those dollars go to the U.S. government. Therefore, Trump would be paying for his wall by stealing money from the pockets of American businesses and workers. His claim also doesn’t make sense because if Mexico is already paying for the wall, why does he need Congress to give him billions in taxpayer money to build it? And why hold the nation hostage for what another nation is supposedly paying for?

Even one of Trump’s closest advisers has admitted to CNN that American taxpayers are the ones who would be paying for the wall, not Mexico.

Trump says the #border #wall will be paid for through the new #NAFTA (USMCA). That’s a chapter you will NOT find in the new Agreement, simply because it does NOT exist #MexicoWontPay #factcheckingplease

Politifact also debunked Trump’s claim, pointing out that “the renegotiated version of the trade agreement is not in effect yet. It has to clear several logistical hurdles and be approved by the legislative bodies of all three countries. If approved, it would likely take effect around 2020.”

And that’s on top of all the other points fact-checkers have made.

Clearly, Trump is desperate to get his wall, even if he has to resort to telling the same demonstrably false claim over and over again.