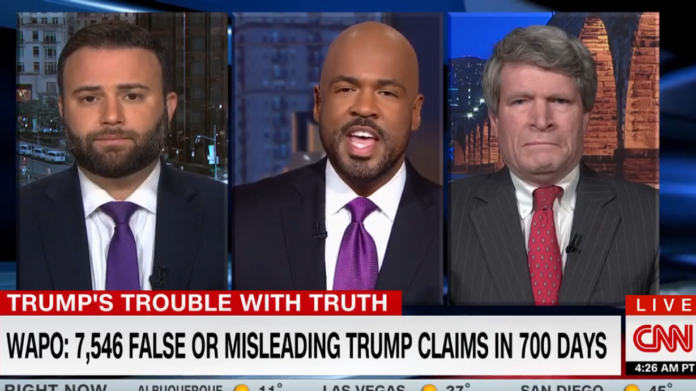 A defender of President Donald Trump’s endless lying got more than he bargained for Saturday morning when he appeared on CNN and tried to blame the president’s lies on the media.

The segment began when host Victor Blackwell used 14 jars filled with gumballs to illustrate the thousands of lies Trump has told since he took office. He then invited Joseph Borelli — who co-chaired Trump’s campaign during the 2016 New York Republican primary — try and defend Trump’s fondness for telling untruths, asking:

“I understand you support the president’s policies, you support his judicial appointments, his performance with the economy thus far. But are you not alarmed by the sheer number of provable false claims the president makes?”

“No, I’m not alarmed. This was a guy speaking in hyperbole throughout the campaign. I love your gumball idea, I think it’s creative, but I don’t recall a similar gumball game when President Obama was president. I think the media that has reported on him cannot be held to a holier than thou standard.”

“Holier than thou! Let me pause you here. This week, specifically with this example, with this week’s standing in front of men and women putting their lives on the line to protect all Americans —.”

Again, however, Blackwell shut down Borelli:

“Let me finish, that was a comma. He also stood there and said this was the first they’d gotten a raise, which was not true. He was not telling the truth about how much the raise was, we’re now at 7,500 of these. Part of the reason you didn’t see this kind of display and tally is because there weren’t so many a day.”

Much like their political savior, those who try and make excuses for Donald Trump have nothing but lies and rudeness as their defense. But as Joseph Borelli found out, the truth wins out over BS every single time.