The United States Blues
Home Economics Trump To Farmers: Sorry I Screwed You Over But Please Blame Obama 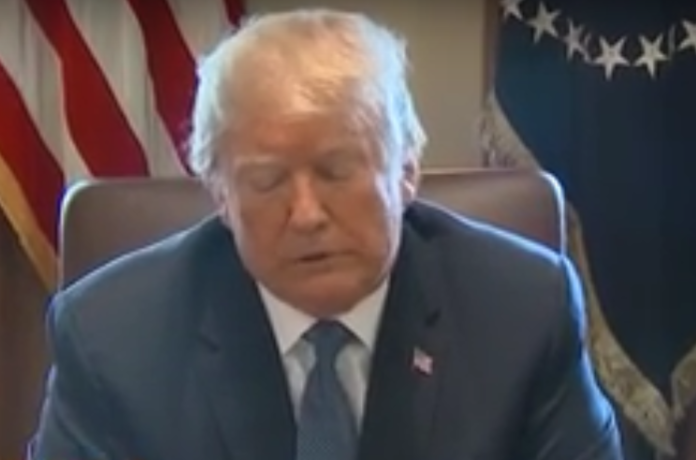 President Donald Trump discussed his trade war with China on Monday and refused to take any blame for farmers getting hammered by retaliatory tariffs. Instead, he suggested that the farmers blame former President Barack Obama for the trade war, all while promising to “make it up to them.”

China, meanwhile, does not need to rely on the United States to get soybeans. The Chinese can simply buy their soybeans elsewhere, such as from Brazil.

That means American farmers will lose money and a valuable customer.

But Trump claimed to have a “good relationship” with China on Thursday at the White House and promised to “make it up” to farmers while suggesting they blame Obama for the trade war that Trump is causing.

China has been taking advantage of the United States for many years. They have really done a number on this country. I don’t blame China. I blame the people running this country.”

We should point out that trade deficits are not necessarily a bad thing for any nation. It just means that we buy more stuff made in China than China buys from America.

After all, Trump would know all about that since he purchases many goods from China to furnish his hotels. Not to mention the fact that he buys building materials from China, and his family has their products made in China.

Our goods deficit with China was $385 billion in 2016 while the United States ran a deficit surplus with China in the services sector.

The fact is that China makes a lot of the products we buy, including microwaves, shoes, clothing, and various other products too numerous to mention. A guaranteed way to lower the deficit would be if Americans bought American-made goods instead of goods made in China. But most Americans are unwilling to buy products that are more expensive when they can buy a cheaper substitute.

Clearly, Trump doesn’t understand basic economics, or he would know that tariffs and trade wars don’t do anything but hurt both sides.

Yet, Trump bragged about how he wants to terminate or renegotiate trade deals, only to turn around and tell farmers that they should be patriotically accepting the pain dealt by his trade war with China in the hopes that they will be rewarded later on.

“If during the course of a negotiation they want to hit the farmers because they think that hits me, I wouldn’t say that’s nice, but I tell you, our farmers are great patriots. These are great patriots. They understand that they’re doing this for the country. And we’ll make it up to them. In the end they’re going to be much stronger than they are right now.”

But Trump didn’t stop there. Rather than take the blame for the economic disaster farmers are facing, Trump suggested farmers blame Obama instead.

“Don’t forget, farmers have been trending downward. Over an eight-year period their numbers have trended downward, in some cases significantly.”

Trump concluded by promising farmers that he would:

“…Make them much better than they’ve ever been.”

Trump is to blame, and this is a trade war. He is ignorant on how economics works and thinks trade wars are “easy to win” even though tariffs played a major role in causing the Great Depression, a time when farmers suffered greatly; to the point of financial ruin.

Obama wasn’t the one who slapped tariffs on agricultural products. China did. Yet, Trump even specifically refused to blame China. And China only enacted those tariffs because Trump slapped them with tariffs first.

If farmers actually buy the bullsh*t Trump is trying to sell them, they deserve the economic pummeling they are about to receive.