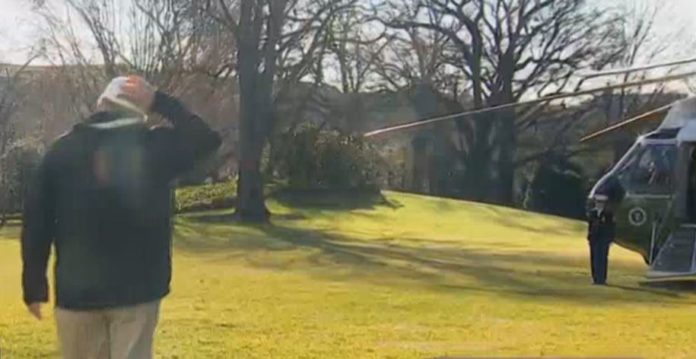 President Trump had an impromptu presser today before heading off on a trip to Texas to visit the southern border.

During the exchange, Trump was asked several questions about the situation there, and Trump, in his usual way, continued to spread falsehoods about what is actually happening there.

For example, when talking about drugs being imported to the US, Trump insisted that most of the drugs were coming through in between ports of entry on the southern border. Trump’s own DEA disputes that reporting that the majority of imported drugs come via commercial vehicles, not individuals, and through the designated ports. Furthermore, many of them come via sea or air — something a “wall” would have zero effect on.

Then Trump was asked by Kristen Welker about the suffering of hundreds of thousands of federal employees that were either working without pay or furloughed and not receiving pay. Trump refused to even address those people.

Trump instead went off on a tirade about anecdotal crimes and claimed the people victimized by them were the only ones he cared about. He also failed to recognize that in addition to the 800,000 federal workers affected, that many more who were contractors probably will never receive any back pay after the shutdown is over.

So, essentially, the POTUS refused to even speak to the Federal workforce that he is in charge of. The only exception being a mention that they will probably be paid “eventually.” Welker gave him a perfect opportunity to speak to them and give them some reassurance that he “had their backs” but chose to go in the opposite direction.

As for the federal workers — being “eventually paid” might be too little, too late as they all still are responsible for things like mortgages, rent, car payments, utility payments, credit card payments, and other payments that could severely affect their living situation and credit rating — something that will affect them for years after the shutdown.

After the presser, Trump set off to go to the southern border — a trip he himself said would “do no good” just last week after the trip was scheduled for him.

Check out the clip of the presser below: