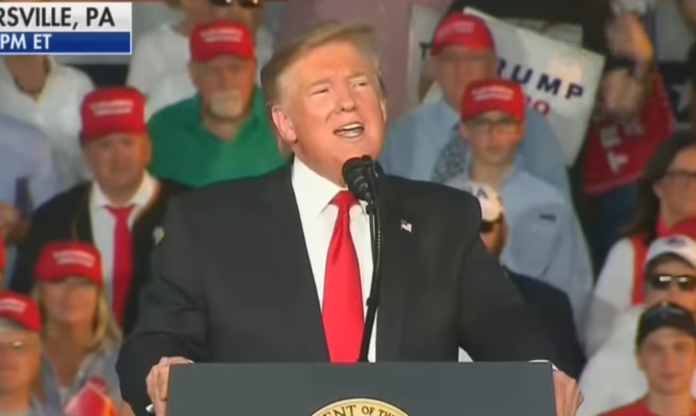 The crowd began to boo, which led the president to add:

“Did you see this guy last night? I did wanna watch. I always have to watch the competition, if you call it that. And he was knocking the hell out of Fox. And Fox has put him in. Somebody’s gonna have to explain the whole Fox deal to me.”

Here’s what Buttigieg had to say Sunday evening regarding Fox and some of their primetime hosts:

“I mean, when you’ve got Tucker Carlson saying that immigrants make America dirty. When you’ve got Laura Ingraham comparing detention centers with children in cages to summer camps. Summer camps. There is a reason why anybody has to swallow hard and think twice before participating in this media ecosystem.”

Buttigieg went on to add that he had chosen to do a Fox town hall so that their viewers could get a different political perspective:

“There are a lot of Americans who my party can’t blame if they are ignoring our message because they will never hear it if we don’t go on [Fox News] and talk about it.

“So it’s why whether it’s going into the viewership of Fox News, or whether geographically it’s going into places where Democrats haven’t been seen much. I think we’ve got to find people where they are—not change our values but update our vocabulary so that we’re truly connecting with Americans from coast to coast.”

Makes perfect sense if you think about it, but Trump attacked Buttigieg and Fox on Twitter Sunday:

Hard to believe that @FoxNews is wasting airtime on Mayor Pete, as Chris Wallace likes to call him. Fox is moving more and more to the losing (wrong) side in covering the Dems. They got dumped from the Democrats boring debates, and they just want in. They forgot the people…..

….who got them there. Chris Wallace said, “I actually think, whether you like his opinions or not, that Mayor Pete has a lot of substance…fascinating biography.” Gee, he never speaks well of me – I like Mike Wallace better…and Alfred E. Newman will never be President!

Clearly, Trump is worried about his chances of being re-elected next year. He’s terrified of Joe Biden and several of the other Democratic challengers. And he’s also under the illusion that Fox should only do reports, interviews, and town halls with him. In other words, it’s more proof that the Megalomaniac-in-Chief needs to be voted out of office.