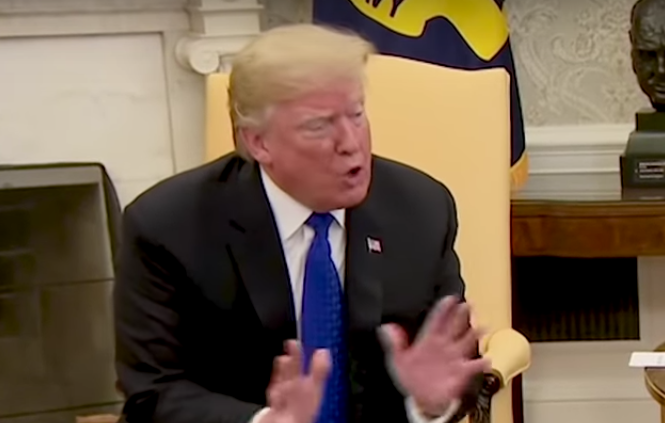 The House Republican version of a continuing resolution on spending that includes border wall funding is on the way to the Senate where it will likely die, but President Donald Trump spiked the football anyway as if he has won some kind of great victory as a government shutdown looms.

The Senate had already reached a deal on a clean bill that would have funded the government through early February without wall funding, which Trump has been demanding for weeks.

But House Republican leaders went to the White House on Thursday afternoon and promptly bowed down when Trump told them he would not sign it if they passed it. So they went back to Congress and passed a version that includes $5.7 billion of taxpayer dollars for a vanity project that most American oppose and that won’t do a damn thing to prevent illegal immigration.

Thank you to our GREAT Republican Members of Congress for your VOTE to fund Border Security and the Wall. The final numbers were 217-185 and many have said that the enthusiasm was greater than they have ever seen before. So proud of you all. Now on to the Senate!

Trump then went on to taunt House Minority Leader Nancy Pelosi (D-Calif.) like a petty child.

Soon to be Speaker Nancy Pelosi said, last week live from the Oval Office, that the Republicans didn’t have the votes for Border Security. Today the House Republicans voted and won, 217-185. Nancy does not have to apologize. All I want is GREAT BORDER SECURITY!

The problem is that it was not much of an enthusiastic vote at all. There are 236 Republicans in the House of Representatives and not all of them voted for the resolution. IN fact, many of them had to come back after they had already left for the holidays. Plus, Trump offered no examples of such enthusiasm. Furthermore, passing the measure in the House was easy, but it’s unlikely to get through the Senate since Republicans would need Democratic votes. In fact, they would need nine Democrats to side with them, which isn’t going to happen. So, this isn’t a win for Trump and it certainly is not a win for the nation as a government shutdown is almost certainly going to happen.

Pelosi responded to Trump on her own Twitter feed.

We all take an oath to protect and defend our country. Border security is an important part of that oath. Your wall will fail in the Senate tomorrow, Mr. President. America cannot afford a #TrumpShutdown. https://t.co/8S7QJzAanT

Democrats are for real border security solutions. Not for wasting billions of taxpayer dollars on an immoral, ineffective & expensive wall.

You do realize that it will not pass the Senate, right?

I thought Mexico was paying for the wall. I’m Upset.

No one said that

“Many have said….” means you made it up

The Senate is not going to pass this resolution, and no matter what Trump says, he is to blame for it. Trump could have agreed to sign the bipartisan resolution the Senate passed on Wednesday night, but he refused, which means America is headed toward a government shutdown during the Christmas season that affects tens of thousands of people.

And just in case it’s not clear how monumentally screwed Trump is because of his refusal to give up his border wall, here’s the video of him saying loud and clear that he is to blame for any government shutdown that occurs because he refused to sign a bill that doesn’t include wall funding.