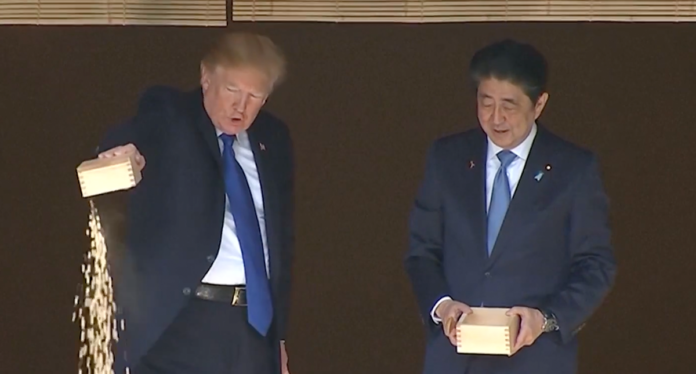 We all cringed at the thought of Trump’s five-nation tour of Asia. Would any epic faux pas be reported in the news today? Now we have the reports, and yep! It looks like Trump did manage to do things in his distinctly unpresidential manner. For one, he suggested Japan could protect itself from the threat of North Korea by buying U.S. weapons. Mind you, the threat from North Korea has only become severe since Trump took office and threatened the country with destruction, “fire and fury the likes of which the world has never seen.” Now he wants to sell Japan weapons to protect them from a threat he exacerbated.

Trump expressed to Japan’s Prime Minister Shinzō Abe that he was disappointed a country of samurai warriors didn’t create a show of force by shooting down the missiles that North Korea had fired over the island of Hokkaido. Then, like a used car salesman or mob boss (you decide?) he pitched American weaponry in a pushy and slightly obnoxious way to Japan.

“He will shoot them out of the sky when he completes the purchase of lots of additional military equipment from the United States,” Trump said to Mr. Abe. “The prime minister of Japan is going to be purchasing massive amounts of military equipment, as he should.”

“It’s a lot of jobs for us and a lot of safety for Japan,” Trump made sure to add.

The New York Times reported that Trump dismissed the idea that his past aggressive speech about North Korea had caused North Korea to respond in kind. Instead, he shifted the blame to previous presidents.

“Some people said that my rhetoric is very strong, but look what’s happened with very weak rhetoric over the last 25 years,” Mr. Trump said. “Look where we are right now.”

In a less serious and more ceremonial moment, Trump still managed to create a stir on social media. Trump and the Prime Minister were feeding the koi at the Akasaka Palace in Tokyo, and Trump dumped out all of his food at once. The full clip reveals that Trump followed Mr. Abe’s lead when he seemed to dump his food in the pond impatiently. See the video below:

Trump also managed to be awkward in suggesting that Japan should buy more cars from the United States, as well as build more vehicles in America. He seemed to ignore the fact that there are many Japanese car assembly plants in America. According to a 2016 report from the U.S. office of the Japan Automobile Manufacturers Association, three out of four Japanese cars and trucks sold in the United States are built in North America.

“Try building your cars in the United States instead of shipping them over,” said Trump. “That’s not too much to ask,” he continued. “Is that rude to ask?”

Fortunately, Prime Minister Shinzo Abe of Japan seems to be dealing with Trump’s bluster quite well –so far. He gave Trump a gold golf cap that reads, “Donald & Shinzo, Make alliance even greater” signed by a Japanese professional golfer, Hideki Matsuyama. After playing the second game of golf with Trump, he remarked that playing a game with the same person two times means that you view them as “your favorite guy.” Mr. Abe has also referred to Trump only by his first name, a definite sign he wants to communicate a closer relationship.

America can count its blessings that Mr. Abe is not taking offense at Trump today. Will we be so lucky with other Asian leaders?