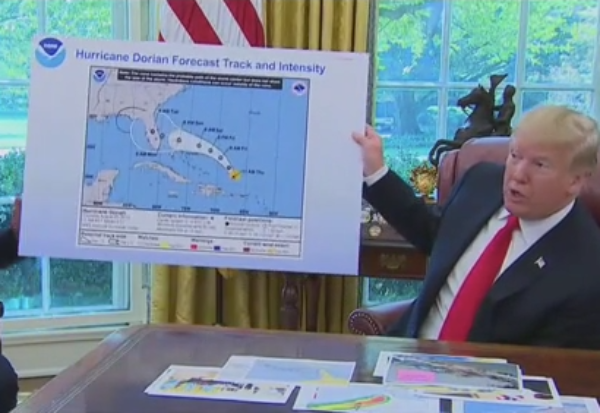 President Donald Trump’s insistence that Hurricane Dorian threatened the state of Alabama took another desperate and pathetic turn on Wednesday when he apparently used a Sharpie to alter a weather map in order to claim that he was right.

On Sunday, despite meteorologists forecasting otherwise, Trump erroneously claimed that Alabama would be in the path of the massive storm.

Ultimately, the National Weather Service was forced to immediately correct the record so as to prevent widespread panic in a state that would definitely not be impacted by Hurricane Dorian, which is now moving along the southeast coast of the United States.

Of course, Trump then lashed out and threw a tantrum calling the correction “phony.”

Again, Trump gave false information to the people and refused to correct it. And while he spent his time obsessively insisting that he was right and attacking his critics, the hurricane wreaked havoc on the Bahamas and hit the United States.

Still unwilling to let it go, Trump continued to lie on Wednesday by unveiling a weather map that had predicted the path of the hurricane to hit Florida head-on. The problem is that in the official circle, Alabama is not within it. Instead, a line was added via a marker to include part of the state in order to make it appear that Trump was right all along.

Trump has been mocked relentlessly ever since unveiling the doctored weather map. But it turns out that altering an official weather map in such a way is illegal according to 18 U.S. Code § 2074, which states that “whoever knowingly issues or publishes any counterfeit weather forecast or warning of weather conditions falsely representing such forecast or warning to have been issued or published by the Weather Bureau, United States Signal Service, or other branch of the Government service, shall be fined under this title or imprisoned not more than ninety days, or both.”

Looks like we can add this new violation to the long list of impeachable offenses. And the list of evidence demonstrating that Trump could possibly not be all there, mentally speaking.