The United States Blues
Home News Trump gets called out for ‘horsesh*t’ lie about Obama and North Korea... 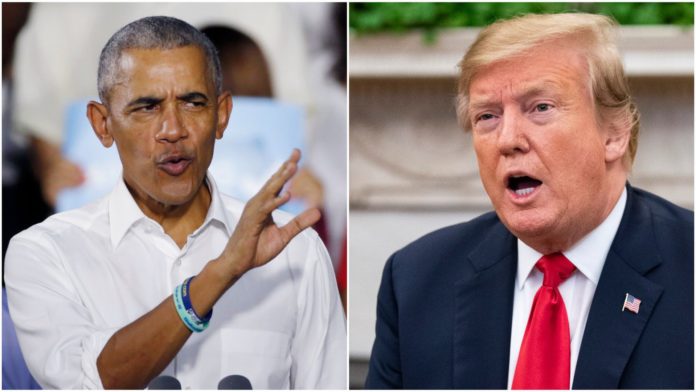 In yet another effort to make Obama look like a weaker president, Trump told reporters that Obama tried to get a meeting with North Korean dictator Kim Jong Un only to be rejected.

“The Obama administration was begging for a meeting,” Trump claimed. “They were begging for meetings constantly. And Chairman Kim would not meet with him.”

While Obama merely considered meeting with Kim Jong Un, a consideration that drew mass outrage from conservatives such as Sean Hannity, he never actually did, nor did he seek a meeting.

Trump would go on to shake Kim’s hand at the DMZ and step into North Korea while gushing about the brutal dictator, legitimizing Kim in a way that conservatives would have denounced as treason had Obama done it.

Former Obama administration officials refused to let Trump get away with lying about their former boss, and took to Twitter to call him out, starting with former adviser Ben Rhodes.

Trump is lying. I was there for all 8 years. Obama never sought a meeting with Kim Jong Un. Foreign policy isn’t reality television it’s reality.

At the risk of stating the obvious, this is horse-sh*t. https://t.co/9YpgVF7qEP

And then answers her question about a lack of progress on denuclearization by dodging the question and reverting to a now vs. then comparison between his record and his inaccurate representation of Obama’s.

Making history while reinventing it. https://t.co/VDfvLcNUUT

Clearly, the facts show that Obama never sought a meeting with Kim Jong Un, but Trump is down on his knees kissing Kim’s a** and degrading the presidency and damaging American prestige, or at least whatever prestige we may have left.

If Trump really thought this lie about Obama would make himself look good, he failed miserably. Because one thing’s for sure. Even if Obama had met with Kim Jong Un, he sure as hell wouldn’t have sucked up to him like Trump is doing.