The United States Blues
Home News Trump gets caught lying about the size of his rally crowd by... 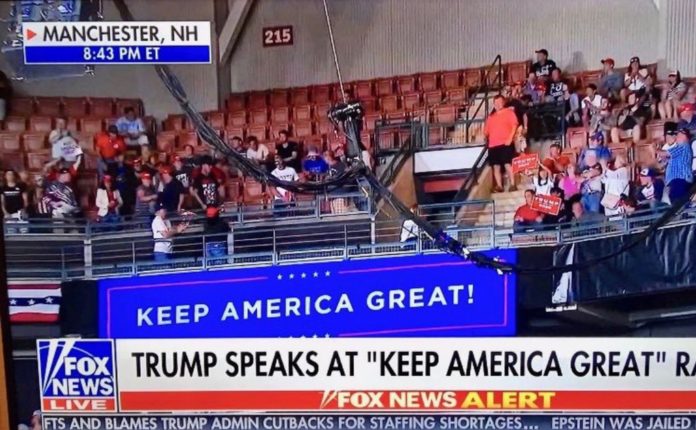 President Donald Trump bragged about the attendance at his New Hampshire rally on Thursday night. The problem is that he got caught lying by Fox News.

Thousands of Trump supporters attended the rally, but Trump made it seem like there were way more people than there actually was, even going so far as to claim that he broke the attendance record set by legendary performer Elton John.

But even Fox News showed many empty seats in the arena, something that is not a feature of Elton John concerts, which Twitter users pointed out.

Looks like a lot of empty seats via this #FoxNews report. Why do you have to #lie about everything? pic.twitter.com/UQleq53A2z

Why weren’t they let in? So many open seats. pic.twitter.com/9oS6DiAFiD

Lol you cropped out the upper tier, which was half empty. pic.twitter.com/i8GQJOOm5H

You’ll never be as popular as Elton John, no matter how many of your cult followers you cram in like sardines to your pep rallies.

You exploited a political domestic issue on the international stage by asking Israel to ban two citizens from your own country. The record you set was being the all-time most racist jackass of presidents in modern history.https://t.co/j4P5O0DZX0

This is a lie. The arena was full of empty seats.

Sounds like the sun is going down on you.

I don’t know about that. pic.twitter.com/QCK9B65Und

Uh oh!
Someone forgot to run the Craigslist ad to pay a whole bunch of seat fillers for your cult gathering. pic.twitter.com/xBuuWZWNZO

Some Trump supporters tried to count the crowd outside the building, but that really does not count, especially since there were empty seats in the arena.

And even if Trump did break a record, that doesn’t mean New Hampshire is going to vote for him in 2020. After all, the state disapproves of him by a 26 point margin.

Clearly, the pictures show Trump is lying. And we have Fox News to thank for finally being truthful for once.