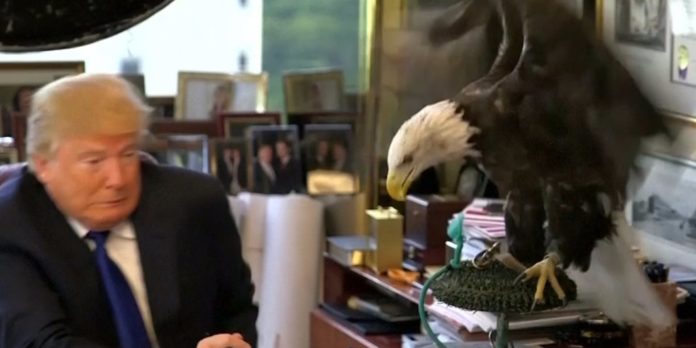 President Donald Trump has windmills on the brain again. And this time they’re killing bald eagles.

Speaking to workers at a natural gas plant in Louisiana Tuesday, the president went off script and began riffing about the Green New Deal:

And then he turned to wind energy, remarking that some progressive politicians “sort of like wind even though it kills all the birds.” He added:

“You want to see a bird cemetery? Go under a windmill sometime. You will see the saddest, you got every type of bird. You know, in California you go to jail for five years if you kill a bald eagle. You go under a windmill, you see them all over the place. Not a good situation.”

As you may recall, this isn’t the first time Trump has made patently absurd claims about windmills. Just last month at a fundraiser, the president commented:

“If you have a windmill anywhere near your house, congratulations, your house just went down 75 percent in value. And they say the noise causes cancer.”

There is no evidence that wind turbines cause cancer. The American Cancer Society told us in a statement that it is “unaware of any credible evidence linking the noise from windmills to cancer.” We also searched the biomedical literature for any studies investigating a link, and couldn’t find any.

6…have a field of ornithology to deal with this.

But why bald eagles lie? Simple. His base doesn’t give a rats ass about birds. But they DO get patriot boners over bald eagles. So that’s the lie. As the ornithologist texted me, “The idiotification of America continues.”

Tremendous mountains of dead bald eagles as far as the eye can see. The biggest ever seen. Everyone is saying it.

@realDonaldTrump claims seeing piles of dead #baldeagles under windmills. I’ll bet this is the only bald eagle he’s ever seen… pic.twitter.com/GY2BrnQOFo