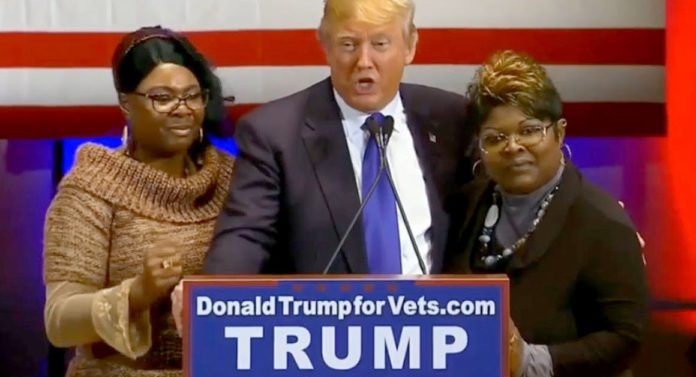 Just this week, the two made an appearance on Fox where they claimed that climate change was caused by the rotation of the earth and nothing to worry about. Diamond (aka Lynette Hardaway) remarked:

“With the earth rotating at 1,000 miles per hour, okay, 365 days of the year. We’re subject to feel climate changing a little bit, but not to the tune where we have to dismantle everything and start the earth back over again. It’s an absolutely ‘no’ for us.”

Fox Nation’s Diamond & Silk respond to @AOC: “With the Earth rotating at 1,000 miles per hour, OK, 365 days of the year, we subject to feel climate changing a little bit.” pic.twitter.com/sWP1jF2LFn

Diamond and Silk have even visited the White House, and apparently did so again recently, based on this tweet:

Enjoyed chatting with our great President, @realDonaldTrump. We love & support the @POTUS because he loves & supports all Americans. He’s done more for black people than any other President in our lifetime. There are those that write history but President Trump is making history. pic.twitter.com/4IZmi2ZjpN

But based on the reaction he got from social media, the president probably should have just pretended he didn’t know Diamond and Silk. Take a look:

Come have a rally in downtown Detroit then Skipper, if black America loves you so much!

Let me correct this:

“Thank you to two great conspiracy theorists for spreading propaganda and making the right look like the fools they are”.

This week, Diamond & Silk claimed that the climate was changing because of the speed of the rotation of the Earth, which is truly a breathtaking level of scientific ignorance.

It’s nice of him to let y’all in the house ain’t it?