The United States Blues
Home Healthcare Trump gets laughed at for claiming Obamacare doesn’t work and does work... 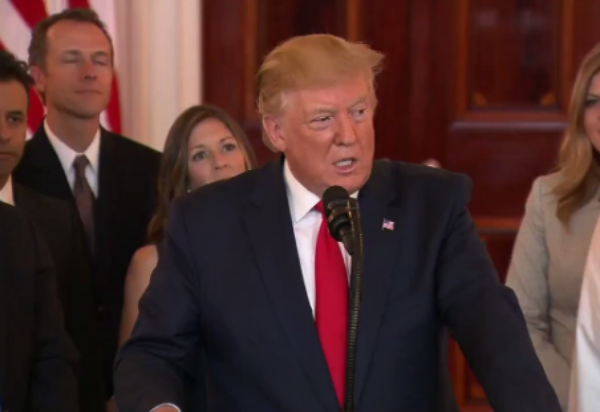 President Donald Trump simultaneously claimed on Tuesday that Obamacare doesn’t work, but that it does work, resulting in people pointing and laughing at him on Twitter.

Trump has frequently referred to Obamacare as a failure and is currently demanding the federal courts strike the entire law down.

But he seemed really confused while speaking at an event on Tuesday when he said Obamacare doesn’t work, only to then say in the very next breath that it “works adequately” because he repealed the individual mandate.

Oh my God. This is hilarious. I can’t wait for Gentry Breitbart and the rest to start writing their pieces about how Obamacare isn’t really, really that bad after all. https://t.co/ldEj1N1jio

we are at war with eurasia https://t.co/YlU0HdOf1C

Other Americans also made fun of Trump.

So it does work. Thanks Obama

Translation -I had no idea that healthcare was complicated. #DumbDonald

Because Republicans have no plan?

Doesn’t work but works adequately. Well if that isn’t a complete contradiction….

It doesn’t work but it work adequately? Does he think before he speaks?

It’s like the truth is fighting for its life to escape his mouth. “Obamacare doesn’t work (but it works!)” …

The fact is that Obamacare would work better if the individual mandate were not repealed since every American would be contributing to the insurance pools. Furthermore, it would also work better if Trump and Republicans would not have been sabotaging it all these years.

It’s also curious that Trump is trying to take credit for Obamacare. It’s like he’s preparing to run on Obamacare in 2020 because he literally has no healthcare plan of his own.

If Obamacare is working, his repeated attempt to gut it should anger Americans even more, especially if Trump gets his way and the courts strike it down, thus yanking healthcare away from 20 million Americans with pre-existing conditions.

Regardless, even if Trump does run on Obamacare, that just means he has no ideas, and Democrats would still have a better plan by offering universal healthcare.