The United States Blues
Home News Trump gets mocked for paying tribute to Vietnam vets: ‘You dodged the... 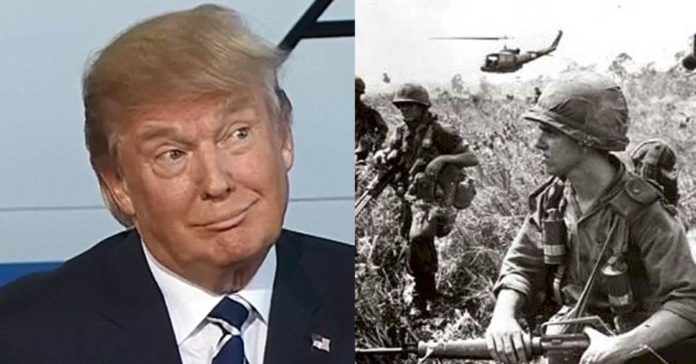 On Friday morning, President Donald Trump went on Twitter and paid tribute to American veterans who served in the Vietnam War. But within minutes he was reminded of his own history of dodging the draft under the guise of having “bone spurs” in his feet.

On this Vietnam War Veterans Day, we celebrate the brave Vietnam Veterans and all of America’s Veterans. Thank you for your service to our great Nation!

Trump’s tweet, of course, comes just a week after he repeatedly attacked the late Senator John McCain, who served with honor in Vietnam and was held as a prisoner of war for over five years.

So it should come as no surprise that most of those who read Trump’s hypocritical tweet were quick to remind him of his own shameful past:

old bone spurs back at it again https://t.co/TSIFwZooFc

On this Vietnam Veterans Day Trump, you’re reminded that you dodged the draft 5 times…FIVE TIMES after your miserable excuse of a father paid a clinician to falsify a medical exemption…Don’t go there ‘Bone Spurs’

Thank you for your lack of service and your fraudulent bone spurs. Asshole.

You missed the part where you apologize to John McCain’s family who was a true hero who served this nation!

Indeed, thanks to all the brave veterans who served and didn’t have their doctor make up fake bone spurs to get them out of having to be brave, you demented coward. Resign.

Thank you to the Americans who bravely accepted their nation’s call.