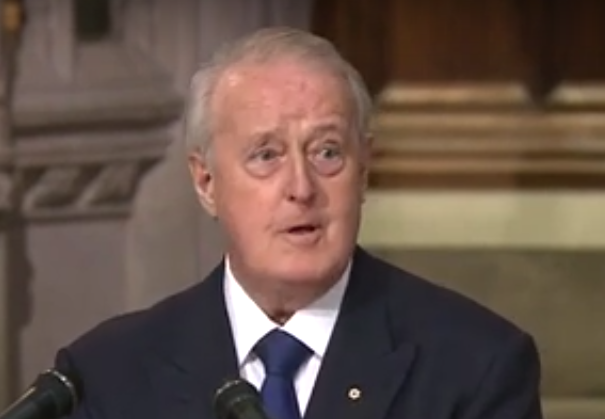 President Donald Trump had to scowl in silence as former Canadian Prime Minister Brian Mulroney delivered a eulogy for former President George H. W. Bush on Wednesday that also appeared to serve as a subtle rebuke to Trump’s presidency.

All Trump could do is sit and silently pout to himself as he was not allowed to deliver a eulogy as past sitting presidents have traditionally done.

And when Mulroney stepped forward to deliver a tribute to his friend, one could not help but notice the friendly barbs the conservative Canadian fired off. Sure, one could say it was merely a list of Bush’s accomplishments during his four years in office, but it appears they were specifically and carefully chosen to present a contrast to Trump’s own actions.

First, Mulroney pointed out that Bush took notes at NATO and genuinely believed in the longtime military alliance:

“At his first NATO meeting in Brussels, as the new American president, he sat opposite me, actually, that day,” Mulroney recounted. “George was taking copious notes, as the heads of government spoke. We were all limited in time. But, you know, it’s very flattering to have the president of the United States take notes as you speak.”

This is in sharp contrast to Trump, who has repeatedly attacked our NATO allies and has threatened to withdraw the United States from it. And Trump certainly does not take notes, nor does he read at the meetings. Instead, he crosses his arms like a petulant child not getting his own way or looks bored like he doesn’t want to be there.

Mulroney’s next barb came as he talked about NAFTA, a trade deal between the United States, Canada and Mexico that Bush is responsible for negotiating, observing that Trump’s new deal is merely an updated NAFTA, which must have stung Trump, who has been desperate to rebrand the deal as the USMCA instead of admitting that the “new” deal is just a slightly tweaked version of the old one.

And while Trump mocks the disabled and attacks laws protecting people with disabilities, Mulroney noted that it was Bush who signed the Americans With Disabilities Act into law:

“President Bush was also responsible for the North American Free Trade Agreement, recently modernized and improved by new administrations, which created the largest and richest free trade area in the history of the world, while also signing into law the Americans with Disabilities Act, which transformed the lives of millions and millions of Americans forever,” Mulroney said.

Mulroney even pointed out that Bush supported “strong environmental legislation, especially laws that protect clean air and water, whereas Trump is the opposite.

“President Bush’s decision to go forward with strong environmental legislation, including the Clean Air Act, that resulted in the acid rain accord with Canada is a splendid gift to future generations of Americans and Canadians to savor in the air they breathe and the water they drink and the forests they enjoy and the lakes, rivers, and streams they cherish,” he continued.

And then he concluded by driving a stake through Trump by making it clear that one thing Bush was that Trump isn’t is a leader:

“There’s a word for this,” he said. “It’s called leadership. Leadership. And let me tell you, that when George Bush was the President of the United States of America, every single head of government in the world knew that they were dealing with a gentleman, a genuine leader, one who was distinguished, resolute, and brave.”

Indeed, Trump is an international laughingstock who caves to dictators such as Russia President Vladimir Putin and Saudi Crown Prince Mohammed bin Salman or gets duped by the likes of North Korean dictator Kim Jong Un. Trump does not know what the meaning of the word “leadership” is and he certainly does not know what courage is considering he dodged the draft during the Vietnam War while Bush risked his life fighting for our country and became a war hero during World War II.

Mulroney brilliantly demonstrated that Bush’s legacy is being savaged by Trump without ever saying so explicitly. He clearly chose his words carefully, which is probably a reason why Bush chose him to deliver a eulogy.