The United States Blues
Home News Trump Gets Owned On Twitter For Claiming His Wall Will Stop Drugs... 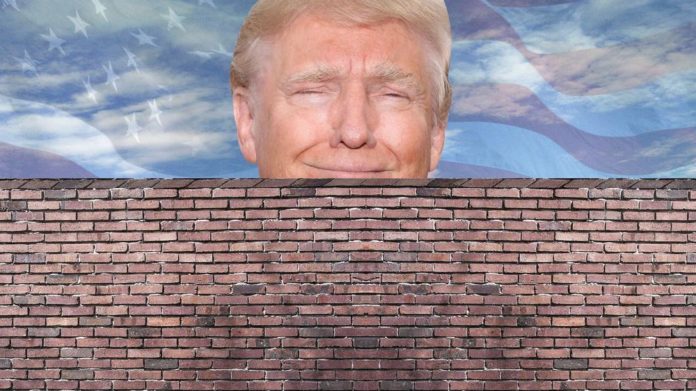 President Donald Trump attempted to promote his border wall on Sunday morning as the government shutdown continues by falsely claiming that it will stop drugs and crime.

Trump initiated the shut down on Friday night as part of his temper tantrum over not getting billions of dollars to build his vanity project along the southern border.

He’s since whining ever since and desperately argued on Sunday morning that his wall will keep Americans safe by stopping drugs and crime:

The only way to stop drugs, gangs, human trafficking, criminal elements and much else from coming into our Country is with a Wall or Barrier. Drones and all of the rest are wonderful and lots of fun, but it is only a good old fashioned Wall that works!

The problem is that Trump, as usual, is lying and is dead wrong.

Not only do most Americans oppose the wall, even the Border Patrol would rather have drones and sensors instead of a wall that they would have to constantly patrol and maintain, which would be costly.

As for Trump’s claim that the wall would stop drugs, Factcheck.org has already debunked it:

“[T]he fact is that most illicit drugs pass undetected through legal ports of entry. Mexican cartels ‘transport the bulk of their drugs over the Southwest Border through ports of entry (POEs) using passenger vehicles or tractor trailers,’the Drug Enforcement Administration said in a 2015 report. ‘The drugs are typically secreted in hidden compartments when transported in passenger vehicles or comingled with legitimate goods when transported in tractor trailers.'”

And according to The Washington Post, studies show that undocumented immigrants commit less crime than natural born American citizens, and most terrorist attacks on our soil are committed by right-wing domestic terrorists or radicalized citizens who entered the United States legally.

It should also be pointed out that migrants could still enter the country by boat or plane, and could even tunnel under or climb over the wall.

How does a wall stop people from hiding drugs in car compartments and mixing them in with thd cargo in legitimate shipments, all of which go through ports of entry?

That’s an important question, since it’s how most drugs make it into the US, and a wall won’t fix it.

What about the mass shootings that are killing Americans on a regular basis? What are you going to do about that?

These aren’t things they might try, these are actual things they do, and a wall is an expensive way to not do a damn thing about them.

Think we need a wall to keep us safe?

“The vast majority of jihadist terrorism cases in the United States — 84% of them — were carried out by American citizens or permanent residents who didn’t need to infiltrate the southern border, or any border.” https://t.co/IpnJrcPzuk

Irony is Christians supporting your hateful policies against refugees when Christmas celebrates a family of refugees fleeing persecution. I wonder how many of them would’ve told the Holy family that there’s no room in the inn?#Exvangelical#EmptyThePews#JesusWept pic.twitter.com/W7kcagtYbn

? the only way you say???? pic.twitter.com/MgbLqVvkzv

Sir, old fashioned convictions work on the “criminal elements” who are already here: among your friends (child molester Epstein), legal team (Cohen), in your campaign (Manafort & Papadopolous), on your inaugural committee (Gates), and in your White House (Flynn)? #ProtectMueller

Wrong. The wall you want would be an environmental disaster and a permanent scar stretching a thousand miles. It would cost billions, & you would recoup that revenue with draconian cuts to social services. It is a 14th century solution to a 21st-century problem.

Building a wall along the southern border is ridiculous. Our border with Mexico is 1,954 miles long. It would not only be a waste of money, it would continue wasting money for decades because of maintenance costs.

Trump’s desire for a wall has nothing to do with actually stopping drugs or crime or immigration. He just wants a monument to himself. And he clearly wants American taxpayers to foot the bill.