The United States Blues
Home News Trump gets pelted with chants of ‘traitor’ and ‘lock him up’ at... 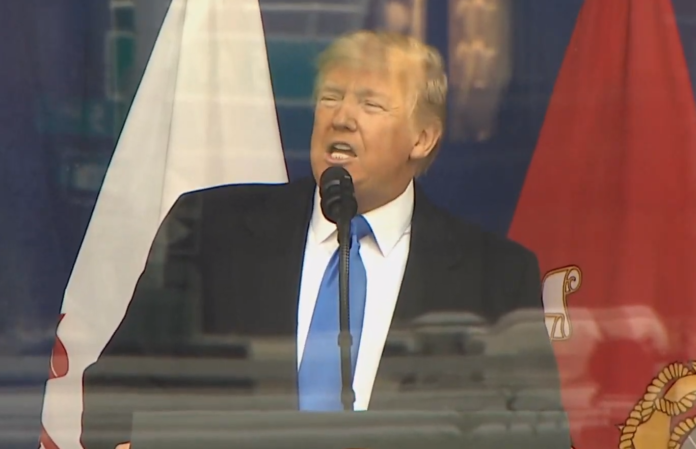 During a speech President Donald Trump delivered Monday in New York as part of a Veterans Day celebration, he was met with calls for him to be impeached, prosecuted, and put in prison.

Even though Trump gave his speech behind bulletproof glass, protesters repeatedly chanted “lock him up” and “impeach and remove” as he made his remarks.

Here are several reports, along with videos of the event:

Incredibly loud protests outside the Trump speech along Fifth Avenue, with whistles, chants of “Lock him up!”

Trump supporters and protesters mix it up at the start of the Veterans Day Parade. Some ugly verbal exchanges. ⁦@Newsday⁩ pic.twitter.com/g76fK9jNcZ

POTUS about to speak at Veterans Day event in Madison Square Park. There’s an “Impeach” sign in skyscraper across street pic.twitter.com/Uyo78vH8gQ

None of this should come as a surprise to anyone. Trump is easily the most polarizing figure in American political history and polls lower than any president since polling began.

Next time, maybe Trump should just stick to tweeting out some tepid praise on Veterans Day and then take it easy for the rest of the holiday so he doesn’t aggravate his bone spurs.