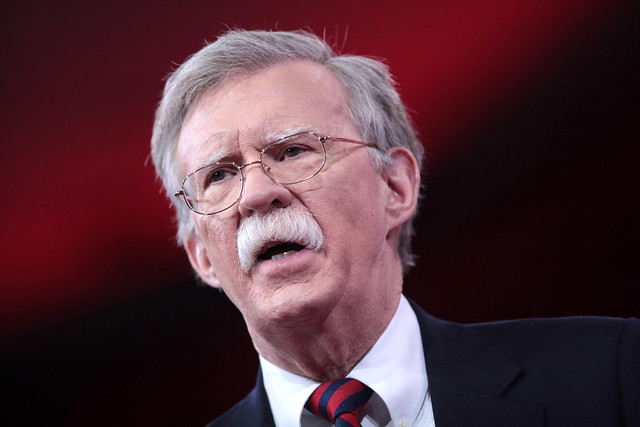 I informed John Bolton last night that his services are no longer needed at the White House. I disagreed strongly with many of his suggestions, as did others in the Administration, and therefore….

….I asked John for his resignation, which was given to me this morning. I thank John very much for his service. I will be naming a new National Security Advisor next week.

Minutes later, Bolton made sure to let the world know he had offered his resignation to Trump on Monday evening:

I offered to resign last night and President Trump said, “Let’s talk about it tomorrow.”

NBC News reports that the two had been at odds over two key areas of U.S. international policy:

BOLTON HAD PUSHED TRUMP TO TAKE A HARDER LINE ON REGIMES HE HAS DEEMED UNTRUSTWORTHY. HE HAD ALSO CLASHED WITH OTHER TOP ADMINISTRATION OFFICIALS, INCLUDING SECRETARY OF STATE MIKE POMPEO.

And it may have been that inability to work with Pompeo that doomed Bolton, according to the Washington Post:

Bolton’s relationship with Pompeo had become increasingly tense in recent months, with Bolton privately accusing Pompeo of spending too much time furthering his own political ambitions and Pompeo arguing that Bolton’s inflexibility and hard line views were corrosive.

Bolton recently said he did not want to appear on television to defend some of the administration’s positions, particularly on Afghanistan and Russia, according to administration officials, who requested anonymity to discuss private conversations.

Bolton irritated others by regularly asking for a large entourage to travel, which many others were frustrated by, the officials said.