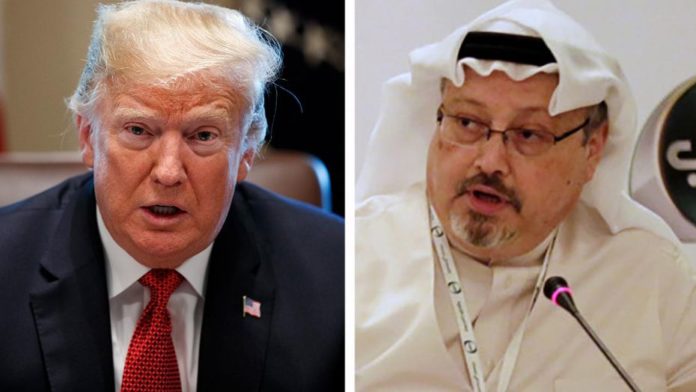 President Donald Trump indicted in a statement released by the White House Tuesday afternoon that he will not punish Saudi Arabia in any matter whatsoever for their role in the murder and dismemberment of Washington Post columnist Jamal Khashoggi.

Despite reports from the CIA that Saudi Crown Prince Mohammed bin Salman was directly involved in the murder of Khashoggi, Trump declared Saudi Arabia to be “a great ally” adding this about the possible involvement of the crown prince:

“King Salman and Crown Prince Mohammad bin Salman vigorously deny any knowledge of the planning of execution of the murder of Mr. Khashoggi.”

Trump then pivoted to a recent arms deal between the U.S. and Saudi Arabia, which he said is valued at $450 million, even though numerous experts have said the deal is not nearly that large and will not create any American jobs:

“This is a record amount of money. It will create hundreds of thousands of jobs, tremendous economic development, and much additional wealth for the United States.”

“Representatives of Saudi Arabia say that Jamal Khashoggi was an ‘enemy of the state’ and a member of the Muslim Brotherhood.”

Not long after the White House released the president’s statement, Twitter lit up with criticism of Trump for choosing greed over morality:

Trump’s message to the world: If you’re going to murder a journalist and dismember his corpse, sign some contracts with Raytheon first. https://t.co/hUrLINgC2c

The era of American global leadership is over. It’s done. The President’s statement is a classless disgrace.

We now sacrifice our values for temporary investments from other countries. https://t.co/XM54H1mFn6

Imagine being tortured and dismembered and then having the president of the country that is supposed to hold your killers accountable instead repeat their smears against you while he gives them a pass.

Since Mr. Trump excels in dishonesty, it is now up to members of Congress to obtain & declassify the CIA findings on Jamal Khashoggi’s death. No one in Saudi Arabia—most especially the Crown Prince—should escape accountability for such a heinous act. https://t.co/exQrZKybhk

Too many bizarre and depraved sentences in here to count, but “maybe he did, maybe he didn’t!” takes the cake. https://t.co/B3sEcqAygs

This is, without a doubt, the most uninformed, imbecilic, toady, poorly-written, categorically untrue statement I have ever seen from a president of the United States. A complete disgrace. https://t.co/9eqoWFeroX