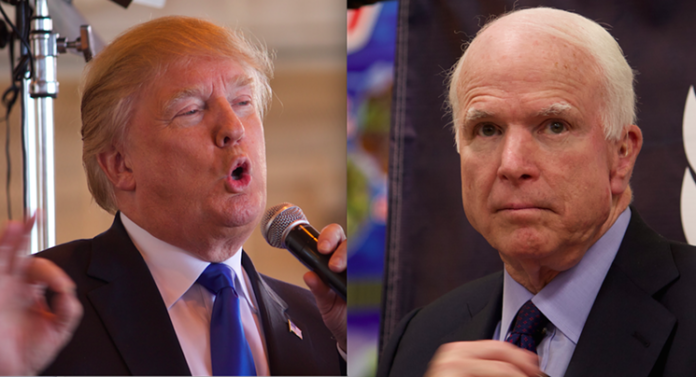 According to the new book Siege: Trump Under Fire, President Donald Trump gloated when he found out that the late Arizona Senator John McCain had been diagnosed with brain cancer and didn’t have long to live.

The book, written by journalist Michael Wolff, was released Tuesday, and The Daily Mail has published some of the highlights, including:

Wolff also alleges that shortly after Senator McCain passed away, Trump began mocking his daughter, The View co-host Meghan McCain “donut” and was “obsessed” with her weight.

Trump made other cruel comments about Senator McCain, according to the book:

According to Wolff when McCain made his tumor diagnosis public in July 2017 Trump said: ‘You see? You see what can happen’ – then he would ‘mime an exploding head’.

As McCain’s illness progressed, Trump moaned that he was not a ‘good enough sport’ to quit his Senate seat and let one of his allies take it over.

Even First Lady Melania Trump was ridiculed by her husband:

When Melania was taken to Walter Reed Medical Center in May last year there was no explanation for 24 hours, which sparked panic in the West Wing.

When asked by his then chief of staff John Kelly what was going on, Trump told him: ‘Nobody cares except the media’, adding: ‘She’s the First Lady, not the President’

Not bad enough? Trump also said he wished he could stunt the growth of his youngest son, Barron:

Trump had a ‘fetish’ about being the tallest person in the room and when Barron hit 12 and had a growth spurt, he joked: ‘How do I stunt his growth?’

Wolff claims that Trump responded to the perceived challenge from his son with ‘hostility’ and ‘went out of his way’ to avoid him.

Donald Trump needs to change his first name to “disgusting.”