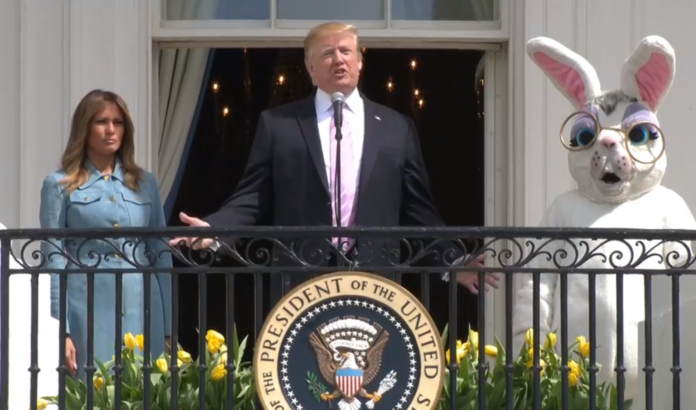 At the annual White House Easter Egg Roll on Monday morning, President Donald Trump demonstrated yet again that he should never be allowed to make unscripted remarks, especially when there are children present.

Trump noted that the first Easter Egg Roll had taken place in 1848, and things went haywire from that point forward:

“This is 141 years that we’ve been doing this. I don’t remember the first one.”

Next was a soliloquy on egg farmers:

“I love them, I know they like me, too. It’s the egg farmers of this country, the egg farmers. And they brought thousands and thousands of eggs. I don’t know if you can use them all, but I have a feeling with these young, very ambitious children, they’re going to find a reason.”

And rather than speak about the significance of Easter, the president began patting himself on the back so much it’s a wonder he didn’t fall and hurt himself:

“Maybe most importantly, I want to wish everybody a very happy Easter. Our country is doing fantastically well. Probably the best its ever done economically. We’re setting records on stock markets, we’re setting records with jobs, and unemployment numbers are the lowest they’ve ever been.”

That was followed by a riff on the military:

“And do we love our military? Our military’s building, is literally being completely rebuilt. All with great product, the best product in the world, and you know where it’s made? In the USA.

Yeah, Happy Easter. As with nearly everything Trump does, it was a day late and wound up only serving to confirm what we’ve long suspected: This guy doesn’t have a clue. And that’s what social media had to say, also: