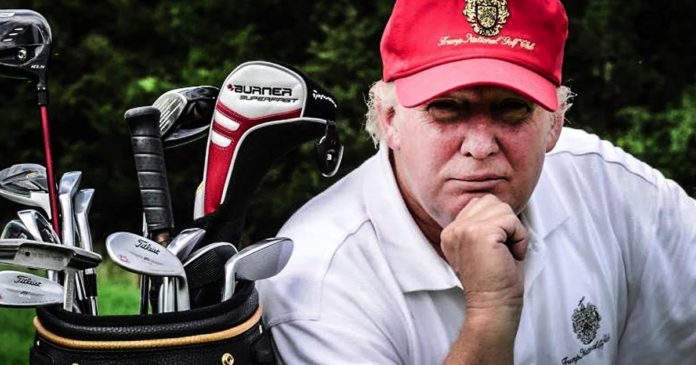 Ever since he first announced his candidacy back in 2015, Donald Trump has repeatedly urged a restrictive policy on the issue of immigration, saying the United States needs to greatly reduce the number of people who are allowed to enter the country, including workers who come to do jobs Americans refuse to accept.

However, when it comes to his golf clubs, Trump and the Trump Organization seem to take a much different stance, even going so far as to urge undocumented workers to file fake documents so they can be employed at Trump properties, the New York Times reports:

“One of the women said that she was allowed to submit fraudulent documents by the Trump employee who interviewed her for her job.”

This stands in stark contrast to comments Trump made shortly after the Trump International Hotel in Washington, D.C. opened. At that time, Trump bragged that he proudly used the electronic E-Verify system to assure that everyone he hired was legally entitled to employment in the United States:

“We didn’t have one illegal immigrant on the job.”

A total of four women have now come forward to reveal that they were hired to work for Trump despite their undocumented status. One commented that she had been hurt by the insults the president has directed at people from other countries and wants Americans to know what a hypocrite Trump is:

“We are tired of the abuse, the insults, the way he talks about us when he knows that we are here helping him make money. We sweat it out to attend to his every need and have to put up with his humiliation.”

Joyce Phipps, who works as an immigration lawyer at a nonprofit legal-aid organization in New Jersey, says a large number of her clients have worked at the Trump golf club in Bedminster. Most of them, she added, were not legally documented and approached her asking how they could become legal residents and workers:

“It is such common knowledge, you have no idea. There are some people who I know got their green cards because they happened to marry a U.S. citizen, but they worked there at Trump’s club for years undocumented.”

Amanda Miller, senior vice president for marketing and corporate communications at the Trump Organization, tried to gloss over the allegations made in the Times piece by commenting:

“We have tens of thousands of employees across our properties and have very strict hiring practices. If an employee submitted false documentation in an attempt to circumvent the law, they will be terminated immediately.”

Miller did not, however, address the allegations that Trump Organization officials told prospective workers to falsify their immigration documents so they could pretend they were in the country legally.

Yet again we see that Donald Trump doesn’t believe the laws of this country apply to him. He seems to think he’s above the law.