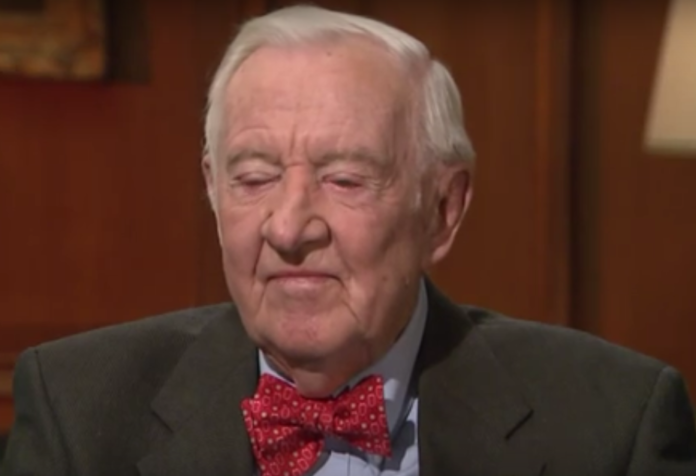 In the wake of the massive March For Our Lives protest against gun violence over the weekend, Stevens penned an op-ed for The New York Times advising the protesters to seek repeal of the “relic” Second Amendment as a “more effective and more lasting reform.”

Stevens specifically detailed that up until Columbia v. Heller in 2008, the Supreme Court had consistently ruled that the Second Amendment does not bar the government from regulating guns.

“Overturning that decision via a constitutional amendment to get rid of the Second Amendment would be simple and would do more to weaken the N.R.A.’s ability to stymie legislative debate and block constructive gun control legislation than any other available option.

That simple but dramatic action would move Saturday’s marchers closer to their objective than any other possible reform. It would eliminate the only legal rule that protects sellers of firearms in the United States — unlike every other market in the world. It would make our schoolchildren safer than they have been since 2008 and honor the memories of the many, indeed far too many, victims of recent gun violence.”

And Stevens has a point. The NRA has used the Second Amendment to argue that Americans should have unfettered access to any kind of guns they desire, even military weapons. The NRA has also opposed every common sense gun law, including proposals like raising the age limit on buying guns, comprehensive background checks, and banning assault weapons.

As it just so happens, a federal appeals court recently ruled that assault weapons are not protected by the Second Amendment, a ruling the NRA and gun nut conservatives expect to get reversed by the Supreme Court.

On Wednesday night, Trump took to Twitter to attack Stevens and used his op-ed to campaign for Republicans in 2018 and argue for stacking the courts with conservative judges.

THE SECOND AMENDMENT WILL NEVER BE REPEALED! As much as Democrats would like to see this happen, and despite the words yesterday of former Supreme Court Justice Stevens, NO WAY. We need more Republicans in 2018 and must ALWAYS hold the Supreme Court!

“I will PROTECT the Second Amendment … not REPEAL it. Like every American, Justice Stevens is entitled to his opinion, but I am very glad he is now retired. Statements like this epitomize out-of-touch liberals who do not appreciate the important role the Second Amendment has played – and continues to play – in our nation. It makes me appreciate President Trump’s nomination and the Senate’s confirmation of Justice Gorsuch even more.”

Let’s be clear, Republicans paved the way for Trump to nominate Gorsuch by hijacking the nomination process in 2016 when the GOP refused to hold a confirmation hearing. Former President Barack Obama nominated his choice of Judge Merrick Garland to replace late-Justice Antonin Scalia as was his constitutional obligation to do. It just so happens though that Judge Garland agrees that the Second Amendment does not grant unlimited access to firearms.

But, for years, conservatives have ignored the “well-regulated militia” part of the Second Amendment, and the NRA has paid Republican lawmakers well via campaign contributions to guarantee no new gun laws pass.

As the movement started by the survivors of the Parkland school shooting continues to grow, Republicans and the NRA may discover that they are the ones who have gone too far.

By refusing even the most common sense of gun measures to prevent gun violence, an avalanche of anti-Second Amendment sentiment may crush the gun lobby and lead to a popular amendment to repeal the Second Amendment. Americans have repealed an amendment before, they can do it again. It’s called democracy.

And if that happens, not even the Supreme Court can stop it, no matter how many Republicans are placed on the bench. And that’s why the NRA and Republicans need to bend on this issue.