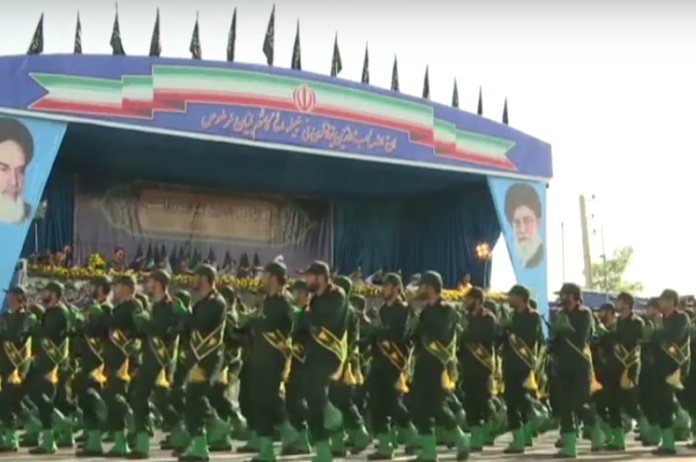 In a statement as part of his hardline against Iran, Trump proclaimed that the government “recognizes the reality that Iran is not only a State Sponsor of Terrorism, but that the IRGC actively participates in, finances, and promotes terrorism as a tool of statecraft.”

“The leaders of Iran are racketeers, not revolutionaries,” Pompeo said. “Businesses and banks around the world now have a clear duty to ensure that companies with which they conduct financial transactions are not conducted with the IRGC in any material way.”

What a coincidence since Trump is not only being investigated for racketeering, his Trump Organization has material business connections with Iran’s Revolutionary Guard.

Back in 2017, The New Yorker published a bombshell report revealing Trump’s ties to Azerbaijanis related to a family who has direct ties to the terrorist organization.

It all has to do with the Trump Organization’s development of the Trump Tower Baku in Azerbaijan backed by a wealthy oligarch.

The Azerbaijanis behind the project were close relatives of Ziya Mammadov, the Transportation Minister and one of the country’s wealthiest and most powerful oligarchs. According to the Transparency International Corruption Perceptions Index, Azerbaijan is among the most corrupt nations in the world.

Trump even “allowed his famous name to be used by a company headed by Ziya Mammadov’s son, Anar, a young entrepreneur” and also “made the deal not just with Anar Mammadov but also with Ziya’s brother Elton—an influential member of the Azerbaijani parliament.”

The report explained that the usual procedure for doing such business is to conduct a thorough risk assessment and background check. The Trump Organization claimed that the process allegedly revealed “no red flags.”

But that’s clearly a lie, and Trump made millions of dollars because of it.

“The sustained back-and-forth between the Trump Organization and the Mammadovs has legal significance,” The New Yorker continued. “If parties involved in the Trump Tower Baku project participated in any illegal financial conduct, and if the Trump Organization exerted a degree of control over the project, the company could be vulnerable to criminal prosecution.”

And that’s not even the most corrupt and damning part of the report.

But the Mammadov family, in addition to its reputation for corruption, has a troubling connection that any proper risk assessment should have unearthed: for years, it has been financially entangled with an Iranian family tied to the Iranian Revolutionary Guard Corps, the ideologically driven military force. In 2008, the year that the tower was announced, Ziya Mammadov, in his role as Transportation Minister, awarded a series of multimillion-dollar contracts to Azarpassillo, an Iranian construction company. Keyumars Darvishi, its chairman, fought in the Iran-Iraq War. After the war, he became the head of Raman, an Iranian construction firm that is controlled by the Revolutionary Guard.

So, Trump’s business is entangled with a terrorist organization and Pompeo has the nerve to lecture banks and businesses about making sure their financial transactions don’t help Iran’s Revolutionary Guard in a material way.

Since that’s the case, Trump should turn himself in. Seriously.