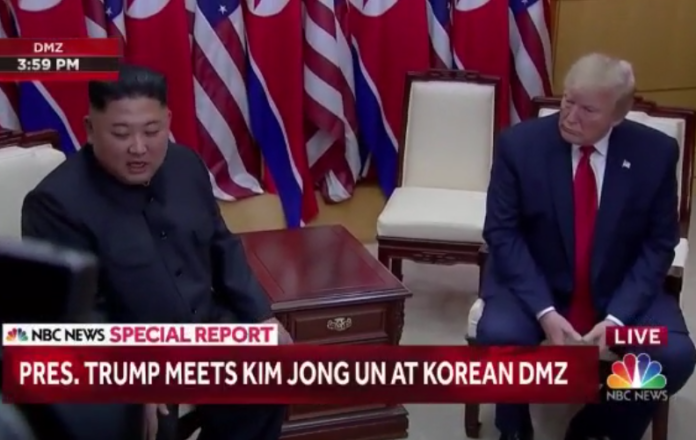 President Donald Trump further legitimized North Korea this week by meeting with Kim Jong Un at the DMZ before stepping into North Korea itself, only to attack American journalists to impress his fellow dictator.

Rather than simply coming back to the United States after the G-20 summit, Trump chose to stop by the Korean peninsula to continue sucking up to Kim Jong Un.

During the visit, he met Kim at the DMZ and took a few steps into North Korea before talking to reporters.

“Stepping across that line was a great honor,” Trump said even though a brutal dictator like Kim deserves no such recognition from the so-called “leader of the free world.”

Trump even further stained the office he holds by inviting Kim to the White House and gushed that the murderous dictator “understands” him.

And then he attacked and insulted the press while praising Kim.

“When I put out the social media notification, if he didn’t show up the press was going to make me look very bad,” Trump claimed. “He made us both look very good.”

Leaving South Korea after a wonderful meeting with Chairman Kim Jong Un. Stood on the soil of North Korea, an important statement for all, and a great honor!

While Trump’s biggest cheerleaders were busy kissing his a** over the meeting, experts and other observers were not fooled.

North Korea is now acting like a normalized nuclear power.
Less rockets flying toward our allies + personnel in the region is a positive security development, but Trump taking 20 small steps into NK was a giant leap backward for global nonpro efforts.@FareedZakaria heading 2U

The more hellos, photo ops, beautiful letters, and supplication by Trump that occur without concrete progress toward CVID, the less likely that national policy goal will ever be achieved.

Otto Warmbier was arrested by North Korean officials and held for one year five months and ten days. This is an American who made international news. There’s no way Kim Jong Un wasn’t in on it all, US intelligence and federal courts agree. Trump chose North Korea over America.

For all those Christians who support president trump: did you know that North Korea leader tortures and kills Christians on a daily basis? Food for thought.

I’m so old, I remember when Obama said we should try talking to North Korea and Republicans screamed “TREASON” so loud their colons turned inside out.

This meeting is not a step forward. It’s a step backward. North Korea has no need to denuclearize because Trump is giving Kim Jong Un everything he wants without having to do a thing in return except flatter Trump with letters. It’s disgraceful and threatens our national security and weakens our foreign policy.