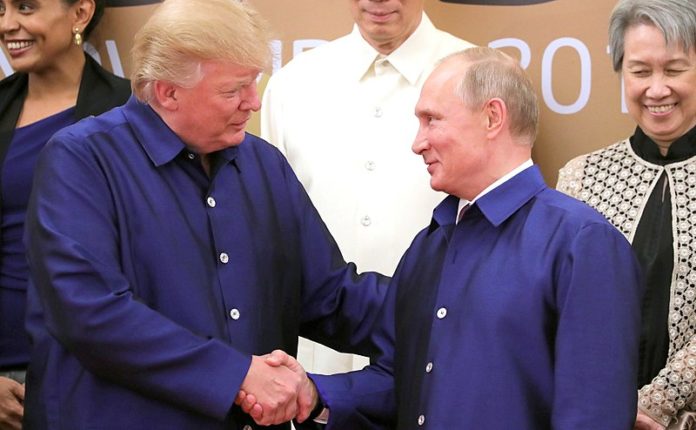 President Donald Trump refuses to criticize and stand up to Russian President Vladimir Putin, no matter what his national security advisers say.

On Tuesday, Trump told reporters that he called Putin to congratulate him on his recent election win.

“I had a call with President Putin and congratulated him on the victory, his electoral victory.”

Putin won a landslide victory in an election in which his main opponent was barred from the race, basically guaranteeing that Putin would win. That’s how dictators operate in an authoritarian state.

It’s not how democracy works.

And that’s why Trump was warned in all caps “DO NOT CONGRATULATE” in his briefing before the call via a leak to the press that has enraged the White House. Whether Trump simply ignored the warning or failed to read it in the first place doesn’t matter.

The point is that he congratulated an enemy leader for winning a fake election. Trump also refused to bring up the poisoning of a Russian spy in the United Kingdom during the phone call, something he was advised to do.

Of course, Republicans were not pleased about the phone call.

“An American president does not lead the Free World by congratulating dictators on winning sham elections. And by doing so with Vladimir Putin, President Trump insulted every Russian citizen who was denied the right to vote in a free and fair election.”

“When I look at a Russian election, what I see is a lack of credibility in tallying the results I’m always reminded of the elections they have in almost every communist country, where whoever the dictator was of the moment, always got a huge percentage of the vote. So, calling him wouldn’t have been high on my list.”

But according to CNN’s Chris Cillizza, Trump’s phone call and the subsequential leak is even worse than we think.

There is clearly a belief among some (many?) of Trump’s advisers that the only way to really get your point across is to put it into the papers and on cable TV. That simply finding a quiet moment to counsel the President as to why he really shouldn’t have congratulated Putin on the call wouldn’t work — that Trump would either not listen or never allow that conversation to happen in the first place.

The fact is that national security advisers should not have to feel like they need to leak information to get a president’s attention. But Trump’s refusal to listen to advice or read his briefings is resulting in national security blunders that are embarrassing and dangerous to our country.

And Trump’s national security advisers are clearly so alarmed by his behavior that they were talking to the press.

This particular blunder suggests that Trump doesn’t care that Putin is a dictator, nor does he care that Russia is attacking the United States. Attacks that include interfering with the 2016 Election continued attacks on upcoming elections, military posturing in Eastern Europe and the Middle East, poisonings in other countries, and cyberattacks that have penetrated our democratic institutions and energy grid.

But no matter what Putin and Russia do, Trump refuses to do anything about it. And that’s the scariest part because it only reinforces speculation that Russia is manipulating Trump with information that he doesn’t want anyone to know. Putin has a puppet in the White House and Americans should be seriously concerned.