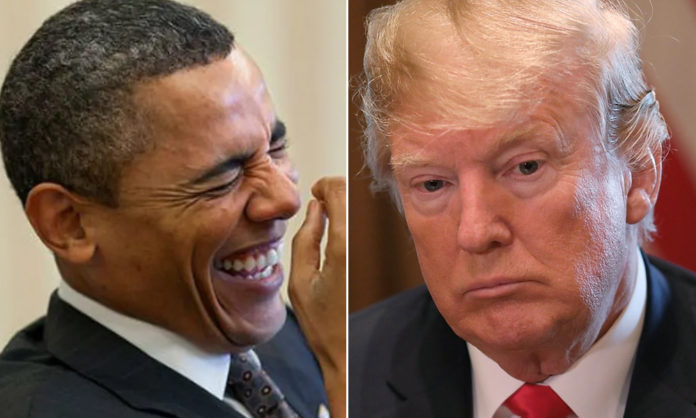 President Donald Trump proved his own jealousy of his predecessor — not to mention his  fear of what the upcoming House impeachment inquiry will uncover about him — with multiple tweets Monday morning in which he all but demanded that Congress open a formal investigation into deals former President Barack Obama made to write a book and a production deal with Netflix.

The possibility of impeachment has been on Trump’s mind lately, and he made that clear with these early morning postings:

House Judiciary has given up on the Mueller Report, sadly for them after two years and $40,000,000 spent – ZERO COLLUSION, ZERO OBSTRUCTION. So they say, OK, lets look at everything else, and all of the deals that “Trump” has done over his lifetime. But it doesn’t….

….work that way. I have a better idea. Look at the Obama Book Deal, or the ridiculous Netflix deal. Then look at all the deals made by the Dems in Congress, the “Congressional Slush Fund,” and lastly the IG Reports. Take a look at them. Those investigations would be over FAST!

First of all, the House Judiciary Committee has clearly not given up on the Mueller Report since they voted to open an impeachment inquiry.

A little while later, after bragging about judicial appointments he’s made and U.S. energy independence, the president was back to the Mueller report and Obama yet again:

They failed on the Mueller Report, they failed on Robert Mueller’s testimony, they failed on everything else, so now the Democrats are trying to build a case that I enrich myself by being President. Good idea, except I will, and have always expected to, lose BILLIONS of DOLLARS..

….for the privilege of being your President – and doing the best job that has been done in many decades. I am far beyond somebody paying for a hotel room for the evening, or filling up a gas tank at an airport I do not own. These Radical Left Democrats are CRAZY! Obama Netflix?

Wow! As others on social media reminded Trump, he sounds desperate and downright pathetic:

This is not the tweet of an innocent man.

Just imagine! As Trump is in the midst of impeachment, Barack and Michelle Obama could be in the midst of winning that Emmy Trump never got, for their new Netflix series.

I’m pretty sure some heads would actually explode.

Sounds like someone is jealous of the well deserved @BarackObama book deal and @Netflix boon. Also, what does that have to do with your flailing, disastrous presidency in which all you seem to be doing is profiting while burning down the Constitution& destabilizing the world.